[dropcap]P[/dropcap]resident Muhammadu Buhari has approved the appointment of Prof. Moji Adeyeye as the Director-General of the National Agency for Food and Drug Administration and Control.

“The President of the Federal Republic of Nigeria, His Excellency, Muhammadu Buhari, GCFR, has approved the appointment of PROFESSOR MOJI CHRISTIANAH ADEYEYE, as the Director-General of National Agency for Food and Drug Administration and Control,  said Mohammed Nakorji, from the Office of the Secretary to the Government of the Federation in a statement.

“ Moji Christianah Adeyeye is a seasoned Pharmacist with a proven track record of accomplishments in Nigeria and abroad. 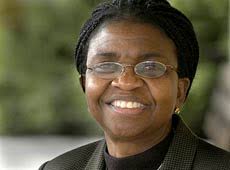 “She is also a Professor of Pharmaceuticals, Manufacturing Science and Drug Product Evaluation, College of Pharmacy, Roosevelt University, USA amongst others.

“The appointment, which takes effect from 3rd November 2017, is for the initial term of five (5) years.”

What you need to know about the new DG

She was awarded a Fulbright Scholarship to research HIV/AIDS medication in Nigeria, in 2004.

•Education: University of Nigeria, Nsukkax; University of Georgia at Athens, for her master’s degree and doctorate in pharmaceutics

•Quote: “AIDS is heartbreaking. Some towns in East Africa are virtually wiped out; in others there are only women and children left. I do not want this to happen in Nigeria.”

“I hated it,” said Adeyeye, explaining that she suffered from allergies and relentless bug bites while growing up in Nigeria.

It was such a different world from the busy city of Ibadan, where she lived with an older sister and was nurtured in a womb of encouraging women.

A bright student, Adeyeye excelled in science, eventually earning a pharmacy degree from the University of Nigeria.

She then headed to the United States and the University of Georgia at Athens, where she earned a master’s degree and doctorate in pharmaceutics.

“I met people crying out for help,” said Adeyeye. “My heart went out to them. Since my area of expertise is in drug formulation and manufacturing, I knew I had to do something.”

It is taboo to speak about one’s health problems in Nigeria, said Adeyeye, who was moved to fight against HIV after learning of the growing crisis in South Africa, a place often called the epicenter of the virus.

Sometimes, it is risky to even get the medicines. In Nigeria, without a federal drug administration, “it’s a battle,” she said, to monitor the quality of the drugs.

A Christian, part of Adeyeye’s mission is faith-based.

She established the nonprofit Drugs for AIDS and HIV Patients, which has offices in Nigeria and the United States and focuses on quality of life for AIDS patients.

It collaborates with Nigerian hospitals that are part of the Baptist AIDS Awareness and Prevention Program and with various Catholic hospitals that serve 80 million people across the nation.

“Here, I can sit in front of a TV and learn so much,” she said. “That is not so in Nigeria, she told Pittsburg Gazette in 2004.