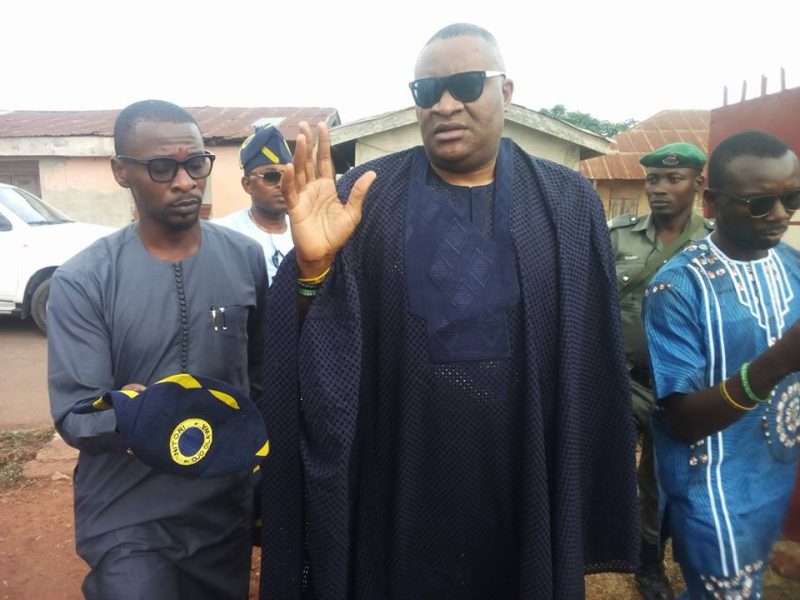 Congressman Bimbo Daramola, a former member of the Federal House of Representatives and Gubernatorial Candidate of the All Progressive Congress who clocked 50 last Thursday has celebrated the leaders of his party and the resilience of party members at these critical moments.

Daramola who spoke amidst friends and followers with journalists in Ado-Ekiti, the state capital at his father’s residence upon arrival from his charity outing to Erelu Adebayo Children’s home at Iyin-Ekiti, one of the activities to mark his 50th birthday anniversary said he has the credentials to fly the party’s flag as the candidate in the July 14, 2018 governorship poll.

He claimed that it is good enough that APC is the ruling party at the Federal level, that it becomes imperative that Ekiti Sate join the league of progressive state and to achieve that we need a well mobilized party to make her victory in 2018 easier, advocating that his party (APC) be prepared to withstand the present Governor of the state.

“Alluding to the loss at the reelection of H.E Dr. John Kayode Fayemi, that it remains a mystery to me as the DG of the election, and I do not want our party to take chances, granted the fact that for three and half years, the present Governor has seemingly driven his political philosophy anchored on stomach infrastructure in such a way that portrays him as a messiah and making us (APC) look like we hate the people.”

Bimbo Daramola while speaking on the joining of the race by a former Governor of the state, Asiwaju Segun Oni, and the rumored joining of the race by H.E Dr. John Kayode Fayemi who he regards as his leader and highly esteemed boss; he stated clearly that the entry of these eminent personalities will attract its own dynamics and realities that the party will have to deal with being the first time such will happen in the state. He however saluted the leadership of H.E Otunba Niyi Adebayo, H.E Dr. Kayode Fayemi, H.E Chief Segun Oni and other party leaders.

On the increasing number of aspirants, the congressman stated that being guided by past reflections and experience, the APC being a party of history should be able to look back in time where in 2007, twelve aspirants decamped from the party in one day after the primaries and with that set the stage for the challenge that lasted for three and half years, with its accompanied turmoil and travails.

“While there is freedom of joining the race, the party also has the responsibility to sift the wheat from the chaff, particularly when there could be moles planted within. I believe the best thing to happen to Ekiti and her beleaguered people, is for the state to be returned to the comity of progressive states for a breather, as at today we are gasping for breath as a party and people.”

“We must not let this election be like the one where I and many others were major casualties, as the fate and fortune of millions of Ekiti people are intrinsically joined to our success at the 2018 elections.”