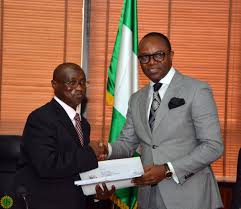 For Nigeria, the Nigerian National Petroleum Company (NNPC), is a cash cow. It attracts the highest earnings for the country, at least for now, until the Zero Oil Agenda goal to wean the country off oil as the staple source of income materializes, if at all.

The nation’s economy is so intractably tied to the vagaries of the world crude oil market, so much that it went into recession during the recent global oil price crash and also started creeping out of the recession with the rather sluggish rebound in  oil prices.

Keen followers of the nation’s economy say the gradual ease of recession isn’t due to any economic policy articulation and implementation, but solely by the improving oil prices at the world market, which slump hit the economy so badly.

Nigerian’s reliance on crude oil revenue to stabilize is so apparent that a recent executive summary of the World Bank stated that, “ Nigeria depends on exports of crude oil for approximately 70 percent of government revenue and 90 percent of foreign exchange earnings.”

Given this self-evident truth, one would have thought that all hands of those in government should be on deck to carefully manage activities of the coordinating parastatal of the nation’s oil wealth, so as to make it more competitive to guarantee long term survival of the industry.

Rather, and unfortunately, the intrigues in policy and politics continue to stand in the way. With the shrinking market for export destinations, occasioned by rising United States crude oil exports, which have cut into markets Nigeria once held dear, for instance China and Japan, the NNPC is reported to have recently partnered with Halliburton to identify crude oil in the Chad Basin using the new Neflex Solution.

Sources close to the NNPC and its supervising Ministry say there is a determined policy initiative to capture the African market in terms of contract awards, be it in crude, investment or other formulations so as to close the lingering gap left by the loss of customers in Europe to the United States.

Tsvetana Paraskova, an oil policy analyst stated for instance that, “the United States was winning markets in Europe last year, including the Netherlands, UK, and Italy, which are also export destinations for Nigerian crude.”  This is in addition to the fact that, “ Japan did not buy Nigerian crude oil in 2016, and China did not receive shipment from Nigeria after April 2016.”

Although the situation was reversed slightly since early 2017, with the start of OPEC cuts, which gave the reprieve, Nigeria now competes with Angola to ship crude to Asia, the largest buyers of African crude, according to Paraskova.

With the lost market share and stiff competition from Angola to export oil, a savvy articulation of policy decisions to maximize the nation’s resources would have been the focal objective by the managers, but the attendant skirmishes and maneuverings now transcends from policy to politicking.

This is made manifest by the ongoing media coverage of NNPC, revolving around leaked memo of the Petroleum Resources Minister of State, Dr. Ibe Kachikwu. Internal workings of the NNPC now make banner headlines in the local media, a situation that not only creates confusion, but also sends wrong signals about the stability or otherwise of the cash cow corporation. This  can result in reputation loss, and hinder NNPC’s  prospects in the new markets being sourced.

To the NNPC stakeholders scattered across the globe, a report of missing $25 billion will definitely not be taken with a grain of salt, it is a huge amount and hopefully the immediate response by the Presidency that “there was no $25 billion NNPC contract anywhere,” would be enough to clear such negative perception.

Senior Special Assistant to the Vice President on media, Mr. Laolu Akande in a statement said, that the transactions mentioned in the leaked memo, “ are simply a shortlisting process, in which suppliers of petroleum are selected under agreed terms, and in accordance with due process.”

According to Akande, “it is therefore wrong and misleading to refer to them as though they are contracts involving the expenditure of NNPC funds.”

The leaked memo and its attendant consequences at a time of supposed policy enunciations to stay competitive, sends out confusion and is capable of derailing even the best thought-out policy, it is capable of affecting investment confidence, thereby robbing the nation of the much-needed revenue from investments to revive the struggling economy.

Gone are the days when NNPC had an equivalent of a captive market, and an almost monopolistic command on crude oil in Africa, Angola has since emerged as a strong competitor, governments of Equatorial Guinea and Cameroon just signed an MOU for gas exploration and Congolese crude oil are all targeted towards the shrinking market in East Asia, Europe and the United States.

The implication here is that the crude oil market is getting tougher with more players and the days of complacency are certainly over. The NNPC should therefore be at optimal performance and not cringed between policy and politics.

Williams Ekanem is a Communications Specialist based in New York