“Secrecy provides convenient cover for the criminal and the corrupt, he said at the EITI beneficial conference in Jakarta, Indonesia.

“We know that anonymous companies are not always illegal or are not always designed to harm. But we also know that secrecy provides a convenient cover for the criminal and the corrupt. And we are not just operating from the theoretical or hypothetical standpoint.”

Osinbajo said : Our lived experience has shown clearly that anonymous corporate ownership could serve as vehicles for masking conflicts of interest, corruption, tax evasion, money laundering, and even terrorism financing.”

Below is the full text of his address

I am honoured to have the privilege of addressing you at this important event. Let me start by commending President Joko Widodo and the government and the people of Indonesia for graciously hosting this conference, and for their remarkable hospitality since we arrived.

On behalf of all who have come to this critical conference from far and near, please accept our gratitude.

The EITI and its various partners are also deserving of gratitude for the valuable time and resources they have poured into this effort and for not relenting in the campaign to end corporate secrecy. We simply cannot thank you enough.

I will be preaching to the converted if I say that hidden corporate ownership poses real and present danger to most countries, especially the developing ones such as ours.

A report that will be frequently cited in this gathering is the one by the One Campaign, titled the “One Trillion Dollar Scandal.” The 2014 report claims that developing countries lose $1 trillion annually to corporate transgressions, most of it traceable to the activities of companies with secret ownership.

Another report that may enjoy mention here is the 2015 report of the High Level Panel on Illicit Financial Flows from Africa chaired by former South African President Thabo Mbeki. The panel stated in its report that Africa had lost over $1 trillion over a 50-year period and that Africa loses more than $50 billion annually to illicit financial flows. Most of these illicit flows are perpetrated in the extractive sector and through companies with hidden ownerships.

Yes, we know that anonymous companies are not always illegal or are not always designed to harm. But we also know that secrecy provides a convenient cover for the criminal and the corrupt. And we are not just operating from the theoretical or hypothetical standpoint.

Our lived experience has shown clearly that anonymous corporate ownership could serve as vehicles for masking conflicts of interest, corruption, tax evasion, money laundering, and even terrorism financing.

But this is not just a developing world’s problem. We live in a more inter-connected world, and anonymous companies have footprints and tentacles that do not respect the developed/developing divide.

Even when the degree of exposure may differ, everyone in today’ world is at risk of the dangers posed by anonymous corporate ownership. If nothing else, the Panama Papers clearly illustrated the global scale and spread of this problem. So this is a global challenge and nothing less than a truly global approach will be needed to tackle it.

We salute the United Kingdom, Norway, Netherlands and Denmark for leading the way in establishing public registers of the real, human owners of companies in their countries and call on other G8 and G20 countries not only to follow suit by initiating actions to end corporate secrecy at home and their dependencies. Open Ownership and its partners must also be commended for establishing a global register of beneficial ownership with entries on about two million companies.

However, we must note that current legislative measures in the mentioned countries may need to go farther to effectively discourage or totally prohibit non-disclosure agreements by governments with big corporates, and to re-evaluate the use of secret trusts to hide beneficial ownership from the prying eyes of the law.

It is important to underscore the fact that opacity in one section of the globe undermines openness in the other. We need to break down this wall together as we are all at risk of the evil effects of opacity in business ownership.

Nigeria is still grappling with the negative consequences of the use of opacity by senior members of government and their cronies between 1993 and 1998 awarding themselves juicy contracts in the extractive industry. One of such incidents involving a company called Malabu Oil and Gas has been and is still subject of criminal and civil proceedings in many parts of the world involving huge legal costs while the full benefit of the natural resource remains unexploited for the benefit of the people of Nigeria to which it belongs.

We must be careful not to frame this campaign as a zero-sum between society and business. While governments and citizens stand to benefit from increased revenues, better law enforcement in this area should improve citizens’ welfare as a result of more ownership transparency. Many big businesses are equally concerned because most are legitimate and many have signed on to business integrity protocols such as EITI and the UN Global Compact.

Legitimate businesses benefit not only from the better business climate that results when governments better serve their citizens but also from knowing who they are doing businesses with or competing against, they benefit from a level playing field, lower costs of doing business, and from reduced reputational risks.

A paper by Stefan Zeume of the University of Michigan and two others showed that 1,105 publicly listed companies mentioned in the Panama Papers lost market capitalisation of $230 billion to the leaks, a loss of $200 million on the average per company.

On many occasions, companies have incurred hefty fines in their home countries for engaging in bribery and other unethical conducts. Hidden ownership and other underhand business practices could thus erode profitability and shareholder value. This is why Ownership transparency is a potential win-win for all, business inclusive.

So we need everyone on board: governments, businesses, development partners, international organisations, civil society groups, media, and citizens.

For us in Nigeria, we will remain on board the EITI and the ownership transparency train because they align with our national priorities and will help to advance the electoral mandate of our administration, which is to fight corruption, combat insecurity and grow the economy.

But we are taking this beyond the extractive sector. At the May 2016 London Anti-Corruption Summit, President Muhammadu Buhari made a commitment to establish a public register of the beneficial owners of all companies operating in Nigeria.

In December 2016, Nigeria joined the Open Government Partnership (OGP) and submitted a National Action Plan that prioritises the establishment of this all-encompassing and publicly accessible register. These are commitments that we made with all sense of seriousness. They are commitments that we made not because we are seeking applause or commendation, but because we are convinced they are in our best interests.

We are however mindful of challenges that will dog this initiative not just in our country but globally. Already, we have noted that the laws passed in some very developed countries do not go far enough to set the examples we really need as they do not cover territories and dependencies where most of the stolen assets from developed countries end up. 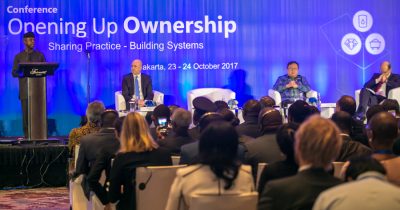 Furthermore, we should expect the following reactions or problems:

1. Resistance in many countries by vested interests to the passage of a comprehensive legal framework for the implementation of an effective beneficial ownership disclosure regime.

2. The huge budgetary implications for developing countries of establishing, verifying and ensuring compliance.

3. Balancing conflicting interests and the right to personal data protection/safeguards from political witch-hunting.

4. Resolution of grey areas on the materiality threshold and the scope of beneficial ownership.

These are of course all surmountable with the required political will and sustained pressure from the global community.

Let me conclude by sharing a message that we constantly deliver to ourselves. As difficult as it may seem, establishing a publicly accessible register of beneficial owners of companies may the easiest part. Making the register count will take a lot of work. It will be important to develop mechanisms to verify the data disclosed and to build the capacities of tax authorities, law enforcement agencies, media and civic groups and even citizens to wade through, interrogate, make sense of and use the data in the registers.

We also need to move away from the illusion of a magic bullet. In fact, there are no magic bullets in the quest for openness and governance reforms. Those who profit from opaqueness will not roll over. They do not have the incentives to do so.

So, it is not inconceivable that as we are busy trying to break down the walls of corporate secrecy, they are also busy erecting new ones. So have no illusions that they will not devise grand schemes to game the system. In fact, they will try. Our task is to make it more difficult for them to hide or disguise the identities of real owners of companies to the detriment of the larger society. As with freedom, the price of openness will always be eternal vigilance.

In a related vein, we should not look at EITI as the one-stop-shop for reversing the resource curse. It is a wonderful tool, which must be mainstreamed and combined with other tools to ensure that natural resources are more prudently managed and better deployed towards both economic growth and sustainable human development. While uniform standards are necessary, we should not make a fetish of them.

It is important to take adequate account of national realities, to iterate, to be ever vigilant of and adapt to new arenas of work such as ownership transparency, and to focus more on impact than on just activities or box-ticking exercises. This is a powerful initiative. It can be even more potent by the collective commitment that we share.

May I, as I take my seat again, thank you, your Excellency and the EITI for this opportunity to share our thoughts.

I wish you fruitful deliberations at this important event.

I thank you all.