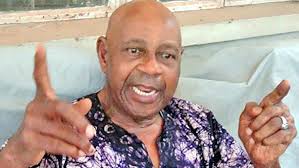 [dropcap]F[/dropcap]ormer minister of Petroleum Prof Tam David -West has said that Minister of State for Petroleum Resources, Ibe Kachikwu, is a minister without portfolio.

‘What is the duty of a minister of state?’ Buhari should be the chairman of the NNPC board and not Kachikwu, who is a minister without a portfolio in reality. It would be better if we scrapped the ‘minister of state’ which is superfluous and redundant, said David West in an interview with The Punch.

“Each time I read the newspapers about this issue, I am upset, said David West who was minister of petroleum when President Muhammadu Buhari was head of state in 1983.

“When I read Kachikwu’s letter, I was flabbergasted. But I was relieved when the NNPC replied that nothing like that happened.

“There is a danger in having Kachikwu loyalists and Baru loyalists in the same sector. It is very dangerous for the nation, he said.