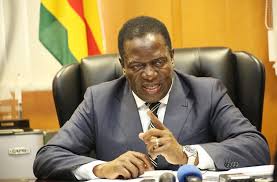 One of Zimbabwe’s vice presidents on Wednesday accused the other of “using lies” over an allegation of poisoning, fuelling political tensions ahead of next year’s elections.

Vice-President Phelekezela Mphoko said his counterpart Emmerson Mnangagwa had undermined President Robert Mugabe when Mnangagwa claimed to have been poisoned at a rally in August.

Mugabe, 93, has maintained strict discipline over his government for decades, but the public dispute comes amid growing in-fighting over who will eventually succeed him.

Mugabe has said that Mnangagwa was not poisoned, apparently to dispel rumours of an assassination attempt.
Mphoko accused Mnangagwa of making a “calculated” challenge to the president’s account of the incident.

“There appears to be an agenda to undermine the authority of President Mugabe and to destabilise the country by using lies,” Mphoko said in a statement. “This must stop.”

Mnangagwa is a favourite to succeed Mugabe, while Mphoko is seen as having no plans to run for the leadership.

The rare public rift came as Mphoko served as acting president during a visit by Mugabe to South Africa.

Mnangagwa, 75, was flown to South Africa for emergency treatment after falling ill at the ZANU-PF party rally in the southern town of Gwanda on August 12.

Some supporters claimed he had been given poisoned ice cream in an attempt to kill him.

Mugabe has already been named by the ZANU-PF as its presidential candidate for the 2018 elections.

The main threat to Mnangagwa’s presidential ambitions is from the “G-40” group led by Mugabe’s wife Grace.

Zimbabwe
Share
Subscribe to our newsletter
Sign up here to get the latest news, updates and special offers delivered directly to your inbox.
You can unsubscribe at any time