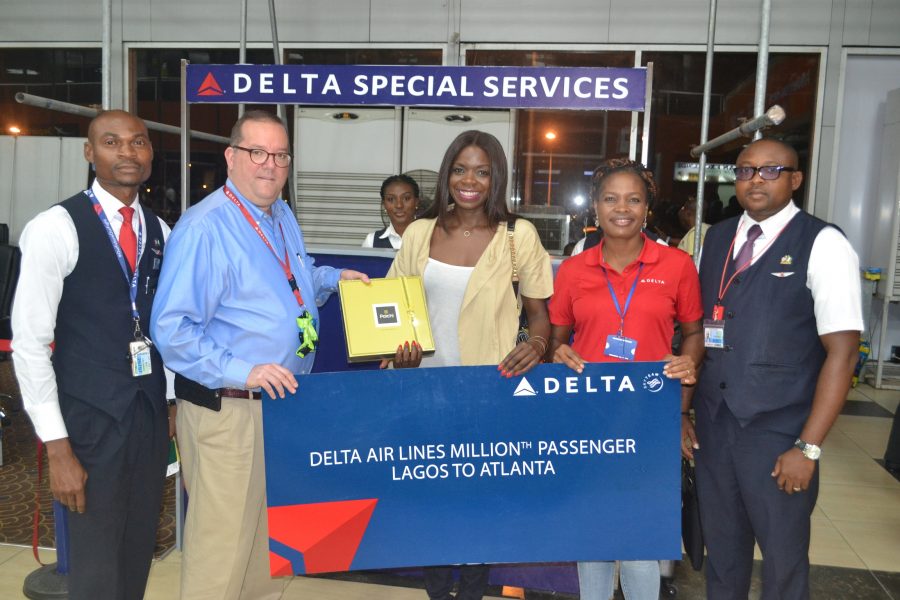 [dropcap]D[/dropcap]elta Air Lines hit an important milestone as it carried the 1-millionth customer to fly on its nonstop service between Nigeria and the United States. The passenger, Ms Gbemisola Abudu, was met by Bobby Bryan, Delta’s Commercial Director for East and West Africa, as she checked in for her flight from Lagos to Atlanta and was presented with a special celebratory gift to mark the occasion.

“Delta has a lot to celebrate in Nigeria and we’re delighted to congratulate Ms Abudu for being our 1-millionth passenger on-board our Lagos route, a landmark moment for our airline,” said Bobby Bryan. “Delta’s operations in Nigeria continue to go from strength to strength. This year we are celebrating our 10-year anniversary in the market and will launch a new route to New York-JFK from Lagos next year.” 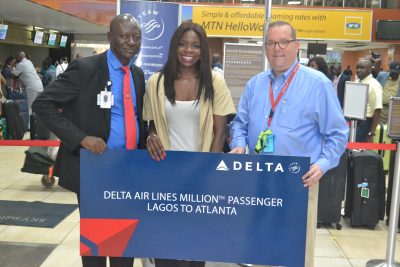 Following her surprise at check-in, Ms Abudu was treated to Delta’s Sky Priority airport service, as well as a VIP celebration in Delta’s airport lounge.

Delta is the only U.S. airline to serve Nigeria and will mark a decade of nonstop service to Lagos in December. From March 26, 2018, the airline will operate daily service between Lagos and the United States, with four weekly services to Atlanta complemented by three new weekly flights to New York-JFK.

Effective October 29, 2017, all Delta services to and from Lagos will be operated using an Airbus A330-200 aircraft. Customers will benefit from a host of onboard amenities including:

Larger seats throughout the aircraft, including Main Cabin.

Delta One features fully flat-bed seats that are 6 centimetres wider and 2.03 metres long, with an angled configuration for greater privacy.

Customizable TUMI amenity kits in Delta One, plus a sleep kits in Comfort + and Main Cabin.

Power outlets and USB power available at every seat in every class of service.

Delta Airline
Share
Subscribe to our newsletter
Sign up here to get the latest news, updates and special offers delivered directly to your inbox.
You can unsubscribe at any time

Party chieftain demands recall of any legislator who votes against abrogation of SIEC, LG autonomy