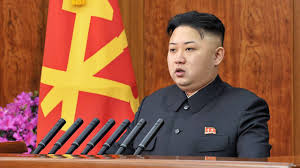 US President Donald Trump is “mentally deranged” and will “pay dearly” for his threat to destroy North Korea, Kim Jong-Un said Friday, as his foreign minister hinted the regime may explode a hydrogen bomb over the Pacific Ocean.

I will surely and definitely tame the mentally deranged US dotard with fire,” he said.

In a rare personal attack published hours after Washington announced tougher sanctions, the North Korean leader took aim at Trump over his maiden speech to the UN General Assembly in which he branded Kim “Rocket Man” and threatened to “totally destroy North Korea”.

Trump “insulted me and my country in front of the eyes of the world and made the most ferocious declaration of a war in history”, Kim said, according to the official Korean Central News Agency.

“I will make the man holding the prerogative of the supreme command in the US pay dearly for his speech,” which he called “unprecedented rude nonsense”.

The dispatch was accompanied by a photo of the North Korean leader sitting behind a desk holding a piece of paper.

On the fringes of the UN General Assembly in New York, North Korean Foreign Minister Ri Yong-ho told reporters Pyongyang might now consider detonating a hydrogen bomb outside its territory. “I think that it could be an H-bomb test at an unprecedented level perhaps over the Pacific,” he said. However, he added: “It is up to our leader so I do not know well.”

China has by far the most influence on North Korea, providing an economic lifeline. But it also fears the consequences if the regime collapses, such as an exodus of refugees or a US-allied, reunited Korea on its border.

Chinese Foreign Minister Wang Yi told the General Assembly it was not too late for talks.

“There is still hope for peace and we must not give up. Negotiation is the only way out and deserves every effort,” said Wang.
Those sentiments were echoed by Russian Foreign Minister Sergei Lavrov, who said that while his government condemned North Korea, “military hysteria is not just an impasse, it’s disaster”.

North Korea
Share
Subscribe to our newsletter
Sign up here to get the latest news, updates and special offers delivered directly to your inbox.
You can unsubscribe at any time