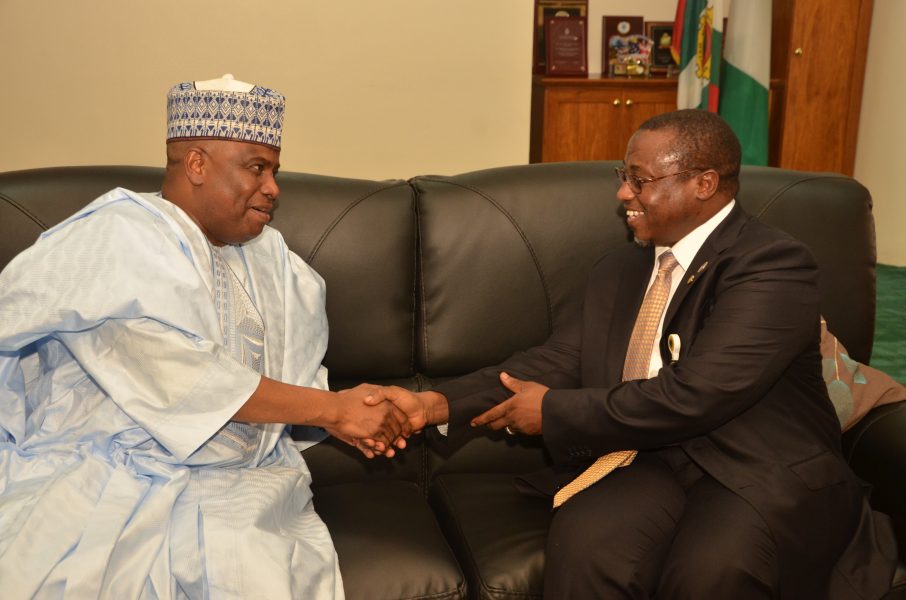 Sokoto State Governor, Rt. Hon. Aminu Waziri Tambuwal, has appealed to the Management of the Nigerian National Petroleum Corporation (NNPC), to activate oil and gas exploration campaign in the Sokoto Inland Sedimentary Basin with a view to establishing the volume and value of hydrocarbon deposits there.

Governor Tambuwal who led a high powered Sokoto State delegation to the NNPC Towers in Abuja today, enthused that based on existing exploration records, it is likely that renewed search for oil in the basin would yield some positive results in the nearest future.

While commending the current administration for re-invigorating the quest for oil in the new frontiers, Hon. Tambuwal noted that the successful search for hydrocarbon deposit in the basin would go a long way in increasing the nation’s oil reserve with the attendant value addition.

“We are here more on an advocacy visit to your office, Mr. GMD, to kindly request for your intervention and attention for the office in charge of frontier exploration to pay attention to Sokoto basin just the way attention is being paid to other basins in the country,’’ he said.

The governor invited the NNPC GMD and Top Management to a conference in Sokoto sometimes in October 2017 which is being facilitated by the Petroleum Technology Development Fund, PTDF in collaboration with the Usman Dan Fodio University.

He said the conference would thoroughly x-ray the search for oil in the Sokoto basin.
Governor Tambuwal also commended the GMD for recent successes in the Corporation especially the stability in the supply and distribution of petroleum products across the country.

Responding, Group Managing Director of the NNPC, Dr. Maikanti Baru explained that the Corporation, without any prompting has since embarked on properly and professional exploration of all inland basins in the country including the Sokoto basin.

He noted that the NNPC had already procured aeromagnetic data on the Sokoto basin from the Nigerian Geophysical Survey as well as awarded contract for the mapping and procurement of apt samples to further the understanding of the area.

Dr. Baru informed that the NNPC has contracted its subsidiary, Integrated Data Services Limited, IDSL to carry out various geochemistry investigation to boost the gathering and integration of all relevant data ahead of the planned procurement of seismic 2D data position which would in turn determine various prospects.

The GMD also pledged to attend the forthcoming seminar on the Sokoto basin, noting that the Corporation would use the platform to update and also share its knowledge of the basin with relevant stakeholders.

On the noticeable limited disruptions in supply of petroleum products due to the recently aborted labour strike, the GMD informed that the issues raised by labor have since been settled. He said normal loading activities have resumed in those areas affected by the industrial action.

BaruNNPCSokotoTambuwal
Share
Subscribe to our newsletter
Sign up here to get the latest news, updates and special offers delivered directly to your inbox.
You can unsubscribe at any time

Africa will become the food basket of the world, says Dangote