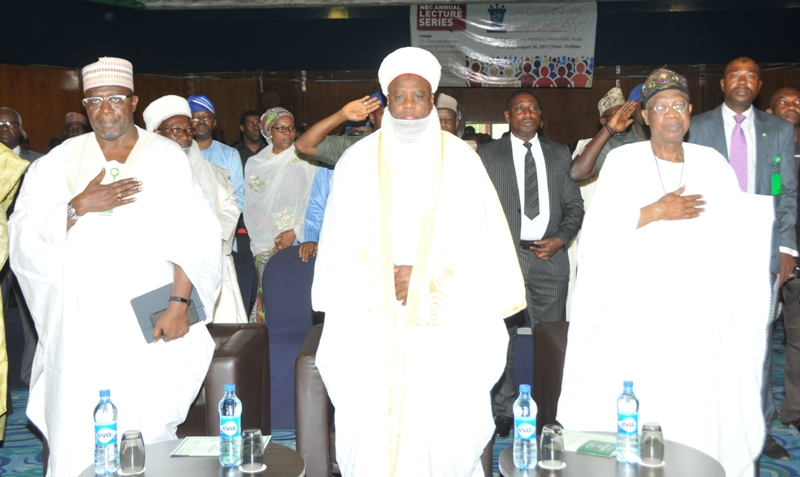 The Federal Government has directed the National Broadcasting Commission (NBC) to sanction any radio or television station that broadcasts hate speech, as part of efforts to stem the growing tide of hate speech in the country.

The Minister of Information and Culture, Alhaji Lai Mohammed, issued the directive in Abuja on Thursday at the 3rd Annual Lecture Series of the NBC, which also coincides with the 25th Anniversary of the Commission.

“As a matter of fact, the challenges facing the NBC have never become more daunting, considering the increasing propensity of some radio and television stations across the country to turn over their platforms to the purveyors of hate speech. It is the responsibility of the NBC to put these broadcast stations in check before they set the country on fire.

“As the NBC celebrates what is a milestone – a quarter of a century – in its existence, I urge the Commission to redouble its efforts in discharging its mandate. The NBC must ensure a strict adherence to the Broadcasting Code, and errant stations must be sanctioned accordingly to serve as a deterrent. The nation looks up to the NBC to restore sanity to the broadcast industry. The Commission cannot afford to do any less at this critical time. It cannot afford to fail the nation,” he said.

Alhaji Mohammed, who cited the ignominious role played by a radio station in fueling the genocide in Rwanda in 1994, which led to the loss of over 800,000 lives in 100 days, charged the NBC not to allow the purveyors of hate speech to lead Nigeria to the path of destruction.

“If you tune into many radio stations, for example, you will be shocked by the things being said, the careless incitement to violence and the level of insensitivity to the multi-religious, multi-ethnic nature of our country. Unfortunately, even some of the hosts of such radio programmes do little or nothing to stop such incitements. Oftentimes, they are willing collaborators of hate speech campaigners. This must not be allowed to continue because it is detrimental to the unity and well-being of our country,” he warned.

The Minister re-echoed the recent position of the Vice-President, Prof. Yemi Osinbajo “that it is the resolve of the government that none will be allowed to get away with making speeches that can cause sedition or that can cause violence, especially because when we make these kind of pronouncements and do things that can cause violence or destruction of lives and property, we are no longer in control.”

“Despite operating with just 45% of the funds available to the immediate past Administration, due largely to the fall in oil prices in our mono-product economy and the failure to save for the rainy day, this government has achieved so much more in so short a time. To put things in perspective, a country that has consistently produced more oil than Nigeria, despite having about one sixth of the Nigerian population, is today embroiled in the worst economic crisis in its history. There is shortage of food, medicine and everything, and there is hyper-inflation.

“With Nigeria being affected by the same downturn in oil prices, coupled with years of monumental mismanagement of the country’s economy and the mindless and maddening looting of its treasury by rapacious public officials, why is Nigeria not in similar crisis as the country in question? My answer is simple: Because Nigeria has a President like Muhammadu Buhari,” Alhaji Mohammed said.

While reeling out the achievements of the Buhari Administration, he said the Administration has brought transparency to governance, with the Treasury Single Account (TSA) enabling the government to monitor its revenue and spending; the modified tax system improving tax collection; the agriculture sector producing food in excess of what obtained one year ago, and the government spent 1.3 trillion Naira on Capital projects in the 2016 budget, the highest in the country’s history.

“Does anyone remember the scandalous fuel subsidies that failed to deliver fuel to filling stations? What about the fertilizer subsidies that never guaranteed the availability of fertilizer to farmers?
Today, fuel queues are gone with the phantom fuel subsidies. Also, thanks to the resuscitation of 11 of the country’s moribund fertilizer blending plants, fertilizer is now available to farmers nationwide. In fact, 6 million bags of fertilizers have been delivered at 30% below the market price, 50,000 jobs created and the 50 billion Naira saved with the stopping of fertilizer subsidy, all because of the revival of those blending plants. Six more are expected to come on stream soon.

“The government is not done. Despite the paucity of funds, the Federal Government’s Social Investment Programmes are being implemented. The N-Power Volunteers Corps created 200,000 jobs in the first batch and 300,000 more will follow shortly; the Homegrown School Feeding is spreading from state to state, providing nutritious food for school children and employing thousands of cooks; the Conditional Cash Transfer (CCT) is providing N5,000 monthly to one million vulnerable and poorest Nigerians; while the Micro-credit scheme will provide over a million Nigerians with small loans at very low rates through the Bank of Industry,” the Minister said.

Alhaji Mohammed said despite the cowardly bombing of soft targets, the Boko Haram insurgency is not in resurgence; and that the fight against corruption is unrelenting, with alleged looters forfeiting the proceeds of their ill-gotten wealth, the corrupt being unable to sleep easy while critical infrastructure like roads and railways are being delivered.

Speaking further on the achievements in the economic sector, he said figures just released by the National Bureau of Statistics have revealed a growth of 95 per cent in capital importation/Foreign Direct Investment in the second Quarter of 2017, over the First Quarter and added that Year on Year increased by 43.6 per cent over the Q2 figure in 2016.

Hate Speech
Share
Subscribe to our newsletter
Sign up here to get the latest news, updates and special offers delivered directly to your inbox.
You can unsubscribe at any time