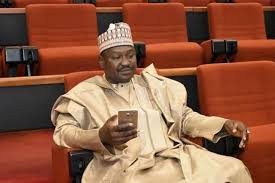 The Police authority said the Senator, who left at the Force as a Deputy Superintendent of Police was being charged with several acts of serious misconducts, unprofessional wrong doings contrary to discipline, and other discreditable improper behaviors unbecoming of a Police officer that are inimical to image of the Force.

The Force in a statement explained that the offences committed by Senator Misau as a police officer could have earned him dismissal or compulsory retirement from the Force, before he hurriedly exited unceremoniously from the Force.

The statement which was issued by the Force Public Relations Officer (PPRO), CSP Jimoh Moshood said the development explain Senator Misau’s ill motives against the Force.

Moshood, who was reacting to a publication Daily Trust Newspaper of August 22, 2017 captioned “Bribe for Promotion: Senator asks DSS to Probe Police, PSC” credited to Senator Hamman Misau, said putting into cognisance the impact of the allegations from the senator on the integrity of the Nigeria Police Force if not investigated, the Inspector General of police promptly set up a Special Investigation Panel on the August 11, 2017 to investigate the allegations of “Police Officers pay bribe for special promotion.”

Moshood said the Special Investigation Panel was also mandated to investigate the allegations from the Senator and other petitions and complaints that may be emanating from Police officers or members of the public on accusations of payment of money for special promotion.

The Force spokesman said the Special Investigation Panel subsequently sent two invitation letters to Senator Misau to meet with the Panel, saying that the first was sent through the Senate President while the second was written directly to him to provide evidence in written form to substantiate and shed light on his allegations and assist the panel to carry out a thorough and discreet investigation into the matter.

Moshood further said; “Senator Isah Hamman Misau declined and when some members of the panel visited him, he bluntly refused to make statement on his allegations.

“Senator Isah Hamman Misau, a distinguished Senator of the Federal Republic of Nigeria, instead of proving his allegations with facts and other evidences to the Panel, granted another media interview reported on page 10 of Daily Trust of 22nd August, 2017 captioned “Bribe for Promotion: Senator asks DSS to Probe Police, PSC written by Ismail Mudashir and credited to the Senator.

“Consequently, his conduct is being reported to the Senate’s ethics and privileges committee for appropriate sanction.

“It is incumbent on the Force to educate the Senator and set the record straight that the Nigeria Police Force has the rights as provided for in the Constitution of the Federal Republic of Nigeria to investigate all allegations of crime and other infractions of law against anyone including an Institution.

“The Force hereby requests that the Senate’s Ethics and Privileges Committee look into the circumstances as mentioned above in the best interest of the National Assembly and the Nation.”

NigeriaPoliceSenator Misau
Share
Subscribe to our newsletter
Sign up here to get the latest news, updates and special offers delivered directly to your inbox.
You can unsubscribe at any time