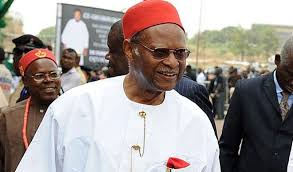 By Amos DuniaThe Anambra State Elders Council rose from a crucial meeting on Thursday with a declaration that there is urgent need to arresting this national drift through a restructuring government architecture by returning to a true federalism based on fewer and more viable federating units.

Towards this end, the Council called on the federal government, particularly the Executive and Legislative arms to urgently take steps to initiate the process of restructuring.

The Anambra elders specifically said that Nigeria, by all universally accepted major national indices; security of life and property, progress in socio economic development, national cohesion on political stability – is clearly under-performing and worryingly drifting towards becoming a failed state.

The Council chaired by former Secretary General of the Commonwealth of Nations, Chief Emeka Anyaoku with former Vice President, Dr Alex Ekwueme, former Governor of Anambra State, Dr Chukwuemeka Ezeife, and former minister of Health, Dr Tim Menakaya as signatory to the communique issued at the end of the meeting, noted that root cause of the under-performance is the transformation of the country’s structure of governance from the true federalism carefully negotiated and agreed in the 1960/63 constitutions by the country’s founding fathers to the effectively unitary structure which arose from the prolonged period of military intervention in the government of the country.

The elders opined that restructuring will usher in greater national cohesion and a more united country where all the citizens in the component regions can pursue their self-fulfilments with equity and fairness.

The 13-point communique further reads; “We firmly believe that there is no part of the country that does not benefit holistically from belonging to one large Nigeria; we therefore see agitations currently for a republic of Biafra and potentially for a Niger Delta Republic and an Oduduwa Republic as manifestation of strong grievances by the agitators.
“In the case of Biafra induced by both perceived failure to heal the wound of the civil war and continuing marginalisation of the South East zone by the federal government, and in other cases induced by a strong conviction that the present governance structure and performance of the federal government constitute a great obstacle to the development and self-fulfilment of their people.

“We feel compelled to draw attention to the recent quit notice given to Ndigbo by Northern Youths and support Ohaneze’s efforts in this respect and call on the federal government to urgently address the matter.
“We see great value in periodic meetings of the major stakeholders of the South East zone – Governors, Federal Ministers and Legislators, Ohaneze, prominent captains of the Cooperate Sector and acknowledged Youth representatives to discuss and there after act on projects promoting peace and development of the Zone. The meetings of the governors and Ohaneze should be more frequent and to be followed periodically by all major stakeholders meeting.”

The Council also called on all concerned to ensure that the people of Anambra State are availed, without any disruptions, of the opportunity to go to the polls and elect their governor on November 18, 2017.

The Anambra elders utterly condemned what it described as the horrendous killing of innocent worshipers at St. Philips Catholic Church, Ozubulu and express their sympathy to the families of the bereaved and the wounded.
The elders therefore called on the law enforcement agencies to ensure that the perpetrators are brought to justice.

The further said; “We see great value for peace and security in sustaining the zoning formula for political offices in the state as adopted by Ohaneze Ndi Igbo Anambra State and also as resolved respectively by the Traditional Rulers Council and Anambra State Association of Town Unions (ASATU), and call on all candidates for the governorship election and their sponsoring political parties to eschew indecorous language and violence in their political campaigns.

“We are appalled that the representation of Anambra Central Senatorial District is still outstanding. We therefore call on the Independent National Electoral Commission (INEC), to ensure that the election is conducted forthwith, without further delay.

“We call on individuals and groups who are contributing to this impasse to put the Anambra State wider interest above their self-interests.

“We call on all Ndi Anambra, irrespective of their political affiliations to continue to dedicate themselves to the continuation of the present peace, security and development of the state.

NigeriaRestructure
Share
Subscribe to our newsletter
Sign up here to get the latest news, updates and special offers delivered directly to your inbox.
You can unsubscribe at any time

SERAP to Osinbajo: Improve safety and security of EFCC officials