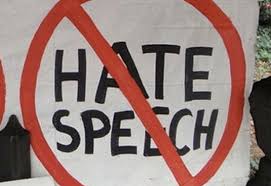 The Acting President, Yemi Osinbajo on Thursday said that purveyors of hate speech will henceforth be treated as terrorists.

Osinbajo read the riot out during the National Security Summit organised by the National Economic Council at the old Banquet Hall of the Presidential Villa, Abuja.

The council, which is chaired by the Acting President, has all the state governors and some relevant ministers as members.

“Please permit me to comment on hate speech. The Federal Government has drown a line on hate speech. Hate speech is a specie of terrorism. As it is defined popularly, it is the unlawful use of violence or intimidation against individuals or groups, especially for political aims, Osinbajo said.

“The law on hate speech, Terrorism Act 2011, defines hate speech, among other definitions, as an act deliberately done with malice and which may seriously harm or damage a country or seriously intimidate a population.

HatespeechNigeriaTerrorism
Share
Subscribe to our newsletter
Sign up here to get the latest news, updates and special offers delivered directly to your inbox.
You can unsubscribe at any time