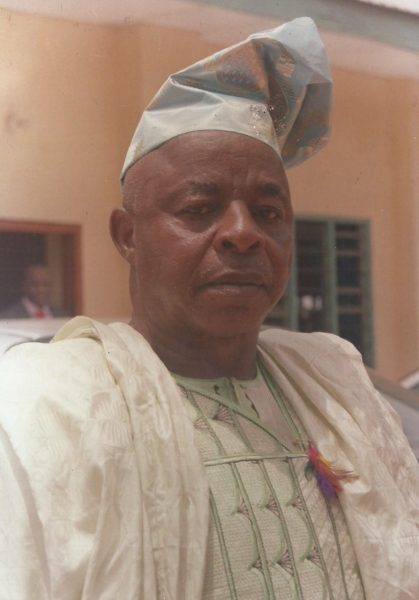 The Odekina family has announced the transition to glory of their father, uncle, brother, friend, husband and grandfather, the patriarch of the Odekina dynasty, Elder Ibrahim Odekina.

After the death of his father, Pa Odekina Ogohi in 1951, his uncle, Pa Okolo Okpachi (Okolo Ekpe), adopted him as his son to raise and mentor him.

He began his education in 1951 as a pioneer pupil of Igala Native Authority Primary School, Eti-Aja-Ugbogbo, Anyigba.
He proceeded to Government Secondary School, Odekina for his Middle School.

After passing his common entrance exams, he was admitted into the prestigious Okene Secondary School, Okene in 1958 (now known as Abdulazeez College, Okene), from where he graduated as an R. K. prize winner.

In furtherance of his study, he was admitted to Government College, Zaria for his Higher School Certificate (A-Levels).
He went on to obtain certificates in surveying and telecommunications.

He also passed and obtained the certificate of City and Guilds London.

Odekina served as Elder at 3rd ECWA Church, Samaru-Zaria; ECWA No. 1, Makurdi; and CEFN Church, Anyigba.
He is also a member of The Gideon’s International and was a member of the Board, ECWA Secondary School Makurdi.

He began his career as an Electrical Engineer at Radio Kaduna Television, Kaduna.

As an outstanding engineer of repute, it is worthy of note that most of his skills in engineering were self-taught.
He later moved to ABU Zaria as Senior Technologist from 1971 to 1976.

Odekina’s expertise were an asset to the institutions he served as well as teams he was part of.
His service years in Makurdi saw him also serve as participant with the World Bank on equipment maintenance, repair and instrumentation.

He rose here to the rank of Chief technologist before retiring voluntarily in 1996 after 24 years post-qualification experience in the discipline of Electrical Engineering and Electronics.

On July 26, 1970 at Qua Iboe Church Ungwan-Shanu, Kaduna, Odekina got married to Mary Ajala Ebenehi.
Their marriage is blessed with five children and 12 grandchildren.

He had a fruitful, eventful and fulfilled family life.

He ran his family with strict standards for discipline, hardwork, diligence and integrity.

In his own words, his motivation has been to take decisions and actions that will ensure none of his children would be handicapped in the race of life.

On the home front, he has left a legacy of excellence, discipline and love for the study of the word of God and prayer.
Odekina’s date with death came as no surprise to him as he was prepared and he ensured his family too was prepared.

Weeks before he passed on, he often reported that he keeps seeing himself in a beautiful place with fine music that he loved very much.

He also said he received visits from three men speaking a language he didn’t understand.

Two weeks before his passing, he kept singing the last stanza of the hymn: “Amazing Grace,” every day, especially during morning devotion:

Yes, when this flesh and heart shall fail,
And mortal life shall cease,
I shall possess, within the veil,
A life of joy and peace.
One of his sons, Omede Odekina of Heirs Holdings, said of the patriarch: “He is a phenomenal father, brother, Uncle, grandfather, friend, and mentor.
“He lived a selfless life and was never economical in his love for God, family, friends and neighbours.
“He was an unrepentant and sacrificial giver.
“His life has been a huge blessing and inspiration to us all.
“He has left a legacy of the difference we all can make by investing in life’s most valuable resource – people.
“He will be greatly missed by all.
“We have the hope of Resurrection as the anchor of our faith.”

Heirs HoldingsOdekina
Share
Subscribe to our newsletter
Sign up here to get the latest news, updates and special offers delivered directly to your inbox.
You can unsubscribe at any time