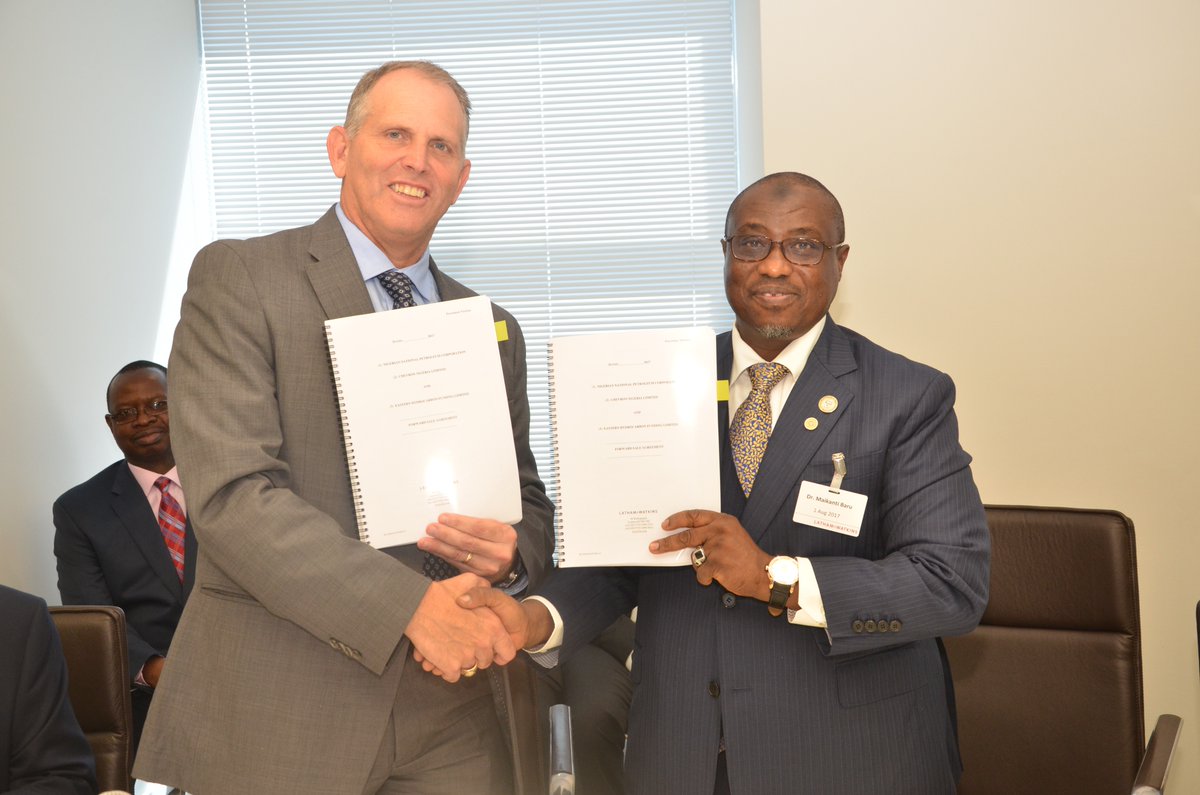 “The project is envisaged to achieve an incremental peak production of about 39, 000 barrels per day of liquids and 283million standard cubic feet of gas per day (mmscf/d) of gas respectively over the life cycle of the asset, said Group Managing Director of the NNPC, Dr. Maikanti Baru, at the signing ceremony.

The two projects are expected to generate incremental revenues of about $16billion within the assets’ life cycle including a flurry of exploratory activities that would generate employment opportunities in the industry, boost gas supply to power and rejuvenate Nigeria’s industrial capacity utilization.

The project is expected to begin to bear fruits in next three and six months.

The Joint Venture partner, he said, had already expended $1.5billion representing 97 per cent of project completion costs, adding that the agreement would cover the remaining $780million to complete the project’s scope.
Providing a breakdown of the expected funding requirements of the Sonam Project, Dr. Baru said $400million is to fund the development of seven wells in the Sonam field (OML 91), the Okan 30E Non-Associated Gas (NAG) well (OML 90), and associated facilities including completion of Sonam NAG Well Platform.

The GMD added that $380million would also be required to reimburse the JV partners for the 2016 portion of the funds committed to lenders that had been cashed and paid for.

He stated that the Sonam Project alone, on fruition, would net the Federal Government cumulative incremental earnings of $7.3billion over the project’s life.

The GMD said the development of the Sonam Project would be carried out in two phases, with the first phase focused on short term activities involving Oil and Gas Generation (STOGG) programme comprising 128 rigless activities and 10 workovers, while the second phase would focus on medium term activities that would involve further development of EA/EJA fields by drilling 14 new well and three workover ones.

He said the first phase of the project is estimated to deliver incremental liquid reserves of about 202.9 million barrels of oil and 161.8 billion cubic feet on Proven and Probable (2P) basis.

The GMD put the total third-party financing for Project Santolina at $1billion, inclusive of financing cost of which, he said, co-lending amounted to $420mm with NNPC’s portion of $850million.

He stated that Project Santolina would generate about $9billion of incremental revenue to the Federation Account over the project’s life cycle and a Net Profit Value (NPV) of $5.2billion over the loan life at 8 per cent discount rate.

Dr. Baru explained that NNPC’s objectives in securing third-party financing for the two sets of projects aligned with government’s aspiration to increase reserves and crude oil and gas production as well as monetize the nation’s enormous gas resources.

He emphasized that the financing option underscored the realization of one of the Corporation’s 12 Business Focus Areas (BUFAs) that is: Increasing crude oil and gas reserves and production to support government’s Seven Big Wins aspiration.

Mr. Jeffrey Ewing, Chairman and Managing Director of CNL, said Chevron Nigeria Limited was committed to supporting Nigeria’s aspirations of sustaining oil and gas production through innovative strategies as typified by the alternative financing arrangements over which agreement was executed.
Similar sentiments were expressed by the consortium of banks involved in the project namely Access Bank, Standard

Saraki: APC Docile, Inactive And Not Same As Years Ago, Says I’m a Member ‘Body and Spirit’