A Tribute To Mama Akande: Celebrating the Unseen Fulcrum of a Vision and Visioner By Bimbo Daramola 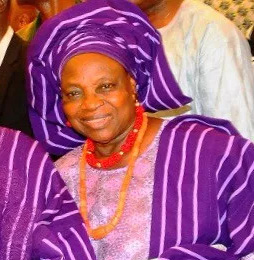 I am so moved this morning to write this short tribute about a fortress that was removed by the grim reaper again.

It’s often said behind a successful man there is a woman and I dare say that the location has since changed from behind to beside.

Today I recall the few times I had the opportunities of meeting this very gentle and affectionate matriarch of the Akande dynasty. Ever so calm not boisterous , receptive and welcoming , a woman of few words but great impact.

For decades mama remained a great pillar of support for and to Baba in His pursuit of an egalitarian society.

She was the unseen armour shielding Baba and making the home of the Akandes a place of succour and refuge for all.

After all the stretching and rigours of the political moves of Baba particularly in the heady days of Baba’s spat with his state assembly members, when he was governor, and all through the trajectory that led to the formation of ACN, A.C. and ultimately the APC which Baba midwifed alongside other nationalists and patriots , Mama though unseen but she must have bore the strain of these periods with so much of gusto to have ceded her husband to the struggle for the emancipation of the weak and the less privileged.

For Baba Akande to have inspite of his advanced age soldiered on in such a way that he could stay days on end through meetings, across the country negotiations that would wear even a young man out; Baba surely drew strength and grace from somewhere in addition to his faith in Almighty Allah, that source was #Mama #Akande.

No doubts an ardent democrat herself otherwise she would have constituted a clog in the wheel of progress which her husband was driving.

Chief #Jeremiah #Obafemi #Awolowo owed a lot to #Mama #Hannah #Dideolu #Awolowo who before his demise he referred to her as his ” jewel of inestimable value” . I am sure Mama Akande was also baked in thesame oven from where Mama Awolowo was baked.

As #Mama #Akande goes back to her creator , her life commends to us ; that of commitment to purpose and to discharge the responsibilities that life may bring our ways without looking for acknowledgement or reward, innocuosly .That is the story of Mama Akande .

She fought her democratic battle through her role as a pillar to Baba. We can imagine moments if anxieties, solitary moments and deprivation. Thank you Mama for being the unseen hand that rocks the cradle

Not too many will be able to connect the dots that if #Mama #Akande made the home front hostile and Afghanistic the journey of the progressives may have been devoid of a man of strong character and value like Baba Akande , or the least is a distracted personae who may be hamsrung from giving his best as he did in the course of the battle for a better Nigeria which #Baba #Akande s life exemplifies.

I join others, the teeming supporters and admirers to condole and commiserate with #Baba #Akande, the rest of the family and pray for the repose of the gentle soul of Mama.

I am sure the separation is painful looking back at over 6 decades of such a great union . My words of encouragement to Baba and the rest of the family is to savour the memories of a life that propped many into relevance and stabilised the fulcrum of a vision and a visioner.

Adieu to Mama Akande , the fulcrum .

Akande
Share
Subscribe to our newsletter
Sign up here to get the latest news, updates and special offers delivered directly to your inbox.
You can unsubscribe at any time