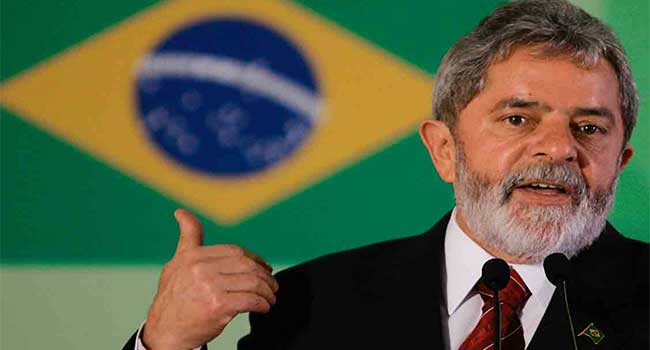 [dropcap]F[/dropcap]ormer Brazil president Luiz Inacio Lula da Silva was convicted and sentenced on Wednesday to nine and a half years in prison for corruption and money laundering.

The term was handed down against Lula over a giant embezzlement and kickbacks scheme centred on state-owned oil group Petrobras, at the heart of a sprawling corruption probe known as “Car Wash.”

The judge hearing the case said Lula — an iconic leftist politician who ruled Brazil from 2003-2010 — remained free pending a possible appeal, according to the verdict seen by AFP.

With Brazil in the grip of prolonged political and economic uncertainty, the sentence risked scuttling a potential comeback bid by Lula in the next elections due in October 2018.

The ruling against Lula, 71, “all but rules him out of the running for next year’s presidential election, and is likely to give a near-term boost to Brazilian markets,” said Capital Economics, an economic analysis firm.

However, it and other observers noted that Brazil’s justice system could yet end up overturning the conviction against Lula, although the courts often move at a snail’s pace.

Lula has repeatedly denied taking any bribes during or after his presidency. He has described the investigation against him by Judge Sergio Moro as a campaign to prevent his return to power.

That part of the probe focused on allegations that Lula received a luxury seaside apartment as a bribe from one of Brazil’s biggest construction companies, OAS.

The judge, who ordered the apartment be confiscated, said Lula had illegally received $1.1 million.

“Between the crimes of corruption and money laundering, there are sufficient grounds for sentences totalling nine years and six months of incarceration,” Moro said in his verdict.

The sentence by Moro, whose wide popularity in Brazil for his anti-corruption work has prompted some to see him as a possible presidential candidate, fed into broader political ructions in Brazil.

Lula’s chosen successor, Dilma Rousseff, was impeached and booted from office last year, with her vice president, Michel Temer, taking over the reins.

Temer himself is battling for his own political survival after being charged with taking bribes.

Two weeks ago, Moro sentenced an influential minister in the governments of Lula and Rousseff, Antonio Palocci, to 12 years in prison for corruption.

Palocci played a central role in the “Car Wash” scheme, most of which unfolded when Lula’s Workers’ Party was in power from 2003 to 2016.

Prosecutors said Palocci was a point man in the flow of “bribes between the Odebrecht construction group and intermediaries of the Workers’ Party,” laundering more than $10 million used for party campaign finances.

Odebrecht, an industrial conglomerate with projects around the world, named Palocci “the Italian” in its list of code names for politicians regularly taking bribes in exchange for lucrative contracts with Petrobras and other favours.

BrazilCorruptionLula
Share
Subscribe to our newsletter
Sign up here to get the latest news, updates and special offers delivered directly to your inbox.
You can unsubscribe at any time

A Deliberate Overlooking of The Law