The group said the region may descend into a free-fall if the federal government continue to ignore calls to sack the Amnesty boss.

The group alleged that the Buhari administration has ignored calls for a complete and immediate overhaul of the amnesty Programme which has become a veritable conduit for fraud, high-handedness under Gen Boroh.

“It is a complete negation of the original intentions for which it was founded, the Voice of Niger Delta Youths (VNDY) said. 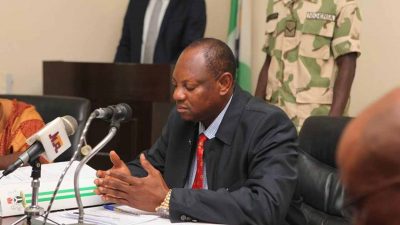 “It is very worrisome that despite series of protests and copious documentary evidences that various stakeholders in the Niger Delta have raised and made available to all the various anti-graft agencies in Nigeria about the unwholesome practices and flagrant abuses of the programme against General Boroh and his cohort in handling the PAP, the Federal Government has continued to treat the matter of beaming its searchlights on the activities of the Amnesty programme with lackadaisical attitude, said Tonye Goodwill, spokesperson for the group

“To us who are stakeholders in the Niger Delta and close watchers of events, this speaks volumes and is in tandem with the loud boasts of Boroh that he has the ears of the high and mighty in the Presidency and as such nothing would happen to him.”

“What is happening now is widespread and open corruption, while General Boroh and his CSO have embarked, with impunity, on the intimidation and flagrant abuse of the fundamental human rights of our people who dare to raise their voices against him over the lopsidedness and glaring fraud in the Amnesty office by instilling fear into them with a view to cowing them into submission.

“As of now over 3000 Amnesty delegates presently studying in Nigerian Universities are still being owed their monthly stipends since February this year while Boroh has just hurriedly paid the offshore students their monthly stipends in order to frustrate a globally planned protest against his corruption activities being currently organised by the Niger Deltans for Accountability and Good Governance (NGAGG) all over the world.”

It stated that it may, in line with the governments of both the United States of America and the United Kingdom’s recent refusal and cancellation of travel visas to top military officials in Nigeria, seek international travel ban against the Boroh led leadership of the PAP should the federal government continue to foot drag on the burning ills plaguing the programmes occasioned by widespread corruption and allegations of having top government officials in their pockets.

The group said despite the fact that most of the participants in the programme were yet to be paid and with no hope in sight, the Amnesty programme boss has just approved a 17-man delegate to visit Belarus, United Kingdom and the United States of America to attend the graduation ceremonies of some of its offshore delegates, it also regretted that the huge amount of money that would be paid as travelling allowances and estacodes for the delegates would conveniently pay about 3 month stipends of the over 3000 Amnesty delegates studying in Nigeria Universities whom PAP had refused to pay since February 2017.

The group urged the Acting President, Prof. Yemi Osinbanjo, SAN, to, as a matter of urgency and, in line with the much vaunted policy of this government to stamp out corruption to make lie of the following boasts of the PAP leadership namely: that it has the ears of the Presidency, the offices of the National Security Adviser to the Presidency, the Minister of Finance and to as a matter of urgency stop the travelling of the 17-man delegate to Europe and America and pay instead the stipends of the Amnesty delegates studying in Nigerian Universities.

AmnestyBorohBuhariDeltaNigerNigeriaOsinbajoPeace
Share
Subscribe to our newsletter
Sign up here to get the latest news, updates and special offers delivered directly to your inbox.
You can unsubscribe at any time

Rejection of Magu: There’s No Going Back, Senate Tells Presidency