Pele was laid in the vault at the Memorial Necropole Ecumenica – just half a mile away from the stadium that made him famous. 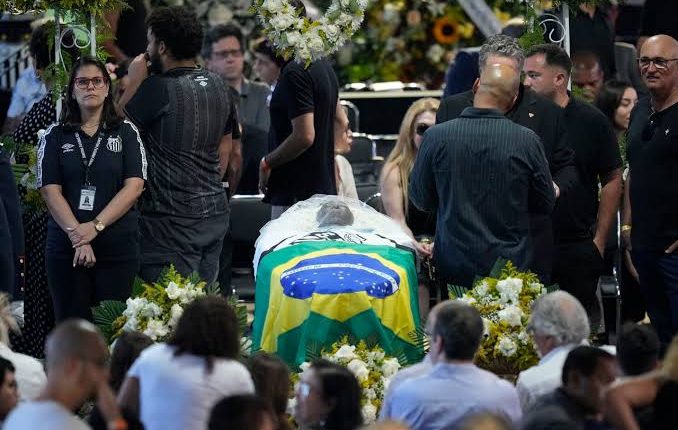 After three days of national mourning, a 24-hour wake and massive funeral procession, Brazilian football legend Pele’s remains were on Tuesday interred in a mausoleum on the ninth floor of the world’s tallest, vertical cemetery.

The coffin of the late Brazilian football star, Pele was transported to the Santos’ Memorial Cemetery after the funeral procession in Santos, Sao Paulo state, Brazil on January 3, 2023.

Pele’s casket, draped in the Brazilian flag and that of his longtime club, Santos FC, arrived atop a red firetruck at the Santos Memorial Cemetery, near the stadium where “The King” began his rise to become what many consider the greatest footballer of all time.

The casket bearing the body of the late Brazil football legend, Edson Arantes do Nascimento, Pele, was draped in the Brazilian flag, as the body was moved round major streets before his burial yesterday in Sao Paulo.

The casket left Santos’ stadium on a fire engine for the procession with thousands of mourners lining the streets.

Pele was laid in the vault at the Memorial Necropole Ecumenica – just half a mile away from the stadium that made him famous.

Pele spent a long time thinking about where he wanted to be buried deciding on his final resting place by paying homage to his father, Dodinho, who died in 1996, wearing the No. 9 shirt.

In a mark of respect to his father, Pele chose to be buried on the ninth floor of the world’s tallest, vertical cemetery.

His fans believe that this resting place will mean Pele can watch over his favourite football pitch for eternity.

The vertical cemetery was built in 1983, and has more than 14,000 vaults. It has a tropical garden, restaurant and even a classic car museum.

The football world paid also their respects to the legendary forward in Sao Paulo.

Tributes flooded in from the footballing community and beyond for a man widely considered to be the best – to ever play the game.

Former Brazilian president, Jair Bolsonaro, whose term came to an end at the turn of the year, declared three days of national mourning after Pele’s passing.

A number of footballers past and present have shared tributes on social media, while a funeral reception and parade through Sao Paulo allowed many to paid their respects in person.

Streets were closed for the procession, which took Pele from the Urbano Caldeira stadium to the Santos’ Memorial Cemetery in Santos, Sao Paulo state.

BrazilPele
Share
Subscribe to our newsletter
Sign up here to get the latest news, updates and special offers delivered directly to your inbox.
You can unsubscribe at any time