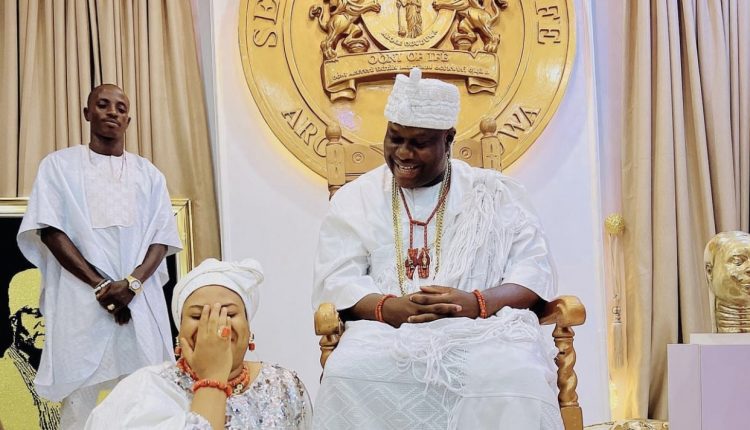 Nollywood actress, Nkechi Blessing, has set tongues wagging following her visit to the aesthetical palace of the Ooni of Ife, Oba Adeyeye Enitan Ogunwunsi, at Ile-Ife, Osun State on Monday.

No sooner than the picture of her visist surfaced on Nkechi’s Instagram page, fans had started reacting and asking if the actress has also agreed to be one of the King’s wives (oloris).

The reactions stemmed from Ooni’s recent marathon nuptials that saw him welcome six wives into the palace within a period of one month, raising eyebrows on the socio-political scene.

But the respected monarch had since moved on and continued to live with his wives in the palace in a bid to break the jinx of frequent break up with his wives.

Nkechi, who described Ooni as a jovial king, is not new to controversies as her last relationship with Falegan didn’t end on a good note for the controversial actress.

With fans asking questions about her motive of visitation, Nkechi simply said: “l have never laughed this hard in a long time.

“Thank you so much for the warm reception his Imperial Majesty, Ooni of Ife, Oba Enitan Adeyeye Ogunwusi, Ojaja II. God bless your existence.”

Nkechi BlessingOoni of Ife
Share
Subscribe to our newsletter
Sign up here to get the latest news, updates and special offers delivered directly to your inbox.
You can unsubscribe at any time