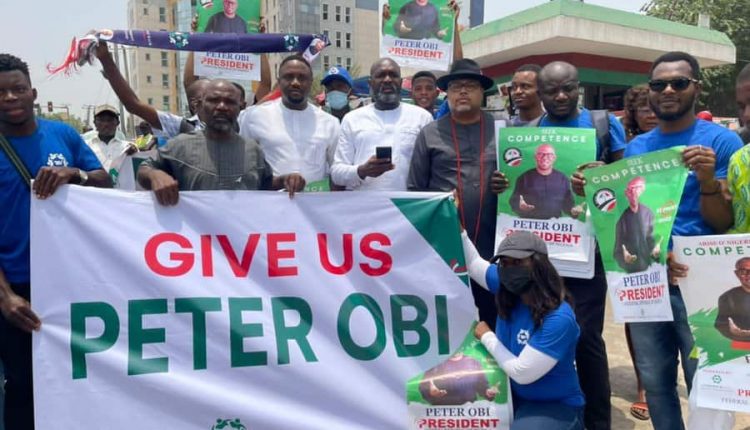 In defiance to the Police order, thousands of supporters of the Labour Party Presidential Candidate, Peter Obi, on Saturday staged a rally at the Lekki tollgate, Lagos, grounding traffic for several hours.

The Lagos State Police Command had on Friday issued an order banning any form of rally at the Lekki Toll gate, hinging its directive on a Lagos high court order that prohibited it.

Persecondnews reports that similar march or rally was held in Asaba, Delta State, Benin City, Edo among other places tagged, “One-million-man march for Obi” which disrupted the independence anniversary celebrations.

In Lagos, motorists and commercial bus operators were forced to take alternative routes as the traffic snarled on the Lekki-Epe Expressway.

The women and girls among them displayed different dancing styles, chorusing political catchphrases and sharing some light entertainments.

The rally also held simultaneously in other parts of Lagos, like Festac town, Surulere and the National Stadium.

This is the second time Obi’s supporters are staging a rally in support of their presidential candidate in the state.

The walk which is tagged Naija Freedom Festival commenced from the popular artillery flyover and climaxed at the Yakubu Gowon stadium where a concert is being held.

In Warri, Delta State, the independence day was observed mainly by Labour Party faithful adorning the green-white-green national colour rallying all over the metropolis in support of the 2023 presidential aspiration of Obi.

As early as 8 o’clock in the morning, the supporters drawn from various communities had mobilized at the popular Effurun Roundabout, singing solidarity songs, from where they marched in a motorcade to the Airport road enroute Warri City Stadium, where they were addressed by party leaders on their active involvement in the forthcoming general elections and urged them to vote right.

They carried assorted placards with inscriptions such as “We need Nigeria refining her own crude oil and producing her own products”, “We say no to insecurity, corruption, ASUU Strike”, “Employing Graduates and not turning them to Keke/Okada riders”.

Other inscriptions are “Nigeria must celebrate Education as key to economic development”, and “A vote for Peter Obi is a vote for better Nigeria.”

Asiwaju Bola TinubuPETER Obi
Share
Subscribe to our newsletter
Sign up here to get the latest news, updates and special offers delivered directly to your inbox.
You can unsubscribe at any time