Meanwhile, the United States Government has reacted to the development, saying it is "deeply concerned" by events in Burkina Faso and encouraged its citizens to limit movements in the country." 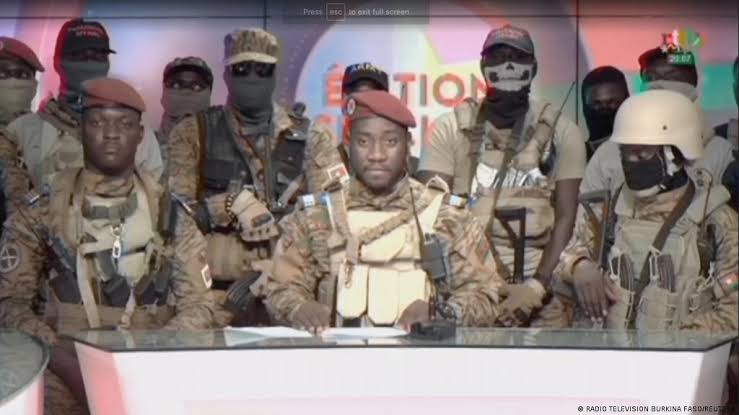 An Army captain in Burkina Faso has announced on national television that he has ousted military leader, Lt.-Col. Paul-Henri Damiba.

Ibrahim Traore cited Damiba’s inability to deal with an Islamist insurgency as the reason.

He also announced that borders have been closed indefinitely and all political activities suspended.

But his administration has also not been able to quell the jihadist violence. On Monday, 11 soldiers were killed when they were escorting a convoy of civilian vehicles in the North of the country.

Earlier on Friday, Col. Damiba urged the people to remain calm after heavy gunfire was heard in parts of the capital.

More than 20 armed soldiers – most with their faces covered – appeared on state TV shortly before 20:00 local time.

“Faced with the deteriorating situation, we tried several times to get Damiba to refocus the transition on the security question,” said the statement signed by Traore.

“Damiba’s actions gradually convinced us that his ambitions were diverting away from what we set out to do. We decided this day to remove Damiba,” it said.

A curfew from 21:00 to 05:00 has been imposed on the country while Damiba’s whereabouts are still unknown.

Meanwhile, the United States Government has reacted to the development, saying it is “deeply concerned” by events in Burkina Faso and encouraged its citizens to limit movements in the country.”

“We call for a return to calm and restraint by all actors,” a State Department spokesperson said.

The Economic Community of West African States (ECOWAS) condemned the move, stating it “reaffirms its unreserved opposition to any taking or maintaining of the power by unconstitutional means”.

Before dawn, shots and explosions were heard in the capital, Ouagadougou, some of them coming from near the presidential palace and main military barracks.

After sunrise, the normally bustling city was largely deserted, with soldiers on the streets blocking some roads and guarding key strategic points.

State television had stopped broadcasting and more gunfire was heard later in the day.

Lt Col Damiba said there was a “confused situation” created by “mood swings” among some soldiers as rumours of a coup intensified.

Urging people to remain calm and avoid social media speculation, the military leader said there were “negotiations under way to bring back calm and serenity”.

Burkina Fasocoup d'etat
Share
Subscribe to our newsletter
Sign up here to get the latest news, updates and special offers delivered directly to your inbox.
You can unsubscribe at any time