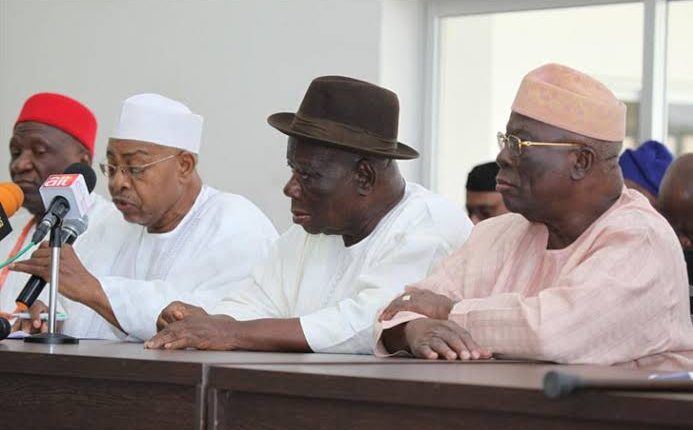 The Southern and Middle Belt Leaders’ Forum (SMBLF) has slammed the Buhari administration for what it called the continuous abdication of the government’s primary and abiding constitutional responsibility of safeguarding the lives and properties of its citizens.

The abdication, the leaders insisted is an irresistible signal to Nigerians to exercise their inalienable rights of self-defence.

Rising from their meeting in Abuja on Saturday, June 25, 2022, chaired by the National Leader of SMBLF and elder statesman, Chief Edwin Kiagbodo Clark,the forum condemned the ambiguity and the failure of the security agencies to decisively deal with security challenges facing the country while accusing the officials of the Federal Government and security agents of being complicit in the prevailing security anomalies.

Persecondnews reports that attendees included elders and leaders from the Southern and Middle Belt regions of Nigeria, representing the respective apex socio-cultural Organizations.

The Meeting extensively discussed critical issues of national concern, including the State of the Nation and worsening insecurity, the outcome of the Presidential Primaries of the Political Parties, the prolonged ASUU strike, continuous Voters Registration and INEC’s preparation for the 2023 general elections.

A statement sad:“SMBLF warns that the continuous abdication of the Government’s primary and abiding constitutional responsibility of safeguarding the lives and properties of its citizens, is an irresistible signal to Nigerians to exercise their inalienable rights of self-defence, by all means, in deviance of extant laws, which have not deterred terrorists the use of weapons even superior to those of the security agencies.

“That the state of insecurity in the country is worsening by the day, with devastating impacts on the welfare and livelihood of ordinary Nigerians, thus, calls on the Federal government to take urgent steps to stem the tide and assuage the suffering of Nigerians.

“Forum denounces the spate of targeted terrorist attacks on Churches and abduction of Church leaders, in the country.

“In this connection, condemns, in strongest terms, the daring attack on St. Francis Catholic Church, Owo, Ondo State on June 5 by gunmen, killing no fewer than 40 people and injuring many other worshippers; describes as worrisome the hasty and doubtful conclusion by the Federal Government that the dastardly act was carried out by the Islamic State of West Africa Province, ISWAP.

“Forum further condemns the incessant killings of the indigenous peoples and decimation of Communities in the Middle Belt Region, in particular, the current escalated war on Southern Kaduna, targeting Communities and Churches in Kajuru Local Government Area of the State, with reports of helicopters dropping weapons and supplies to the terrorists in their locations.’’

“SMBLF equally decried the continued confinement of victims of the Kaduna Train attack in the terrorists’ labyrinth after 89 days as well as several other Nigerians who have been held by terrorists and criminals for months; calls on the Federal Government and security agencies to secure the safe release of all victims,’’ the statement signed by Chief Edwin Kiagbodo Clark, Chief Ayo Adebanjo, Leader of Afenifere, Dr. Pogu Bitrus, President-General, Middle Belt Forum and Ambassador Okey Emuchay, MFR, Secretary-General, Ohaneze Ndigbo Worldwide for the President-General, said.

The leaders also restated the imperative of state police in the internal security architecture of the Federation and urged the Federal Government and the National Assembly to put in place the requisite legislative instrument for a law establishing state police instead of indulging in meaningless lamentations.

On the outcome of the presidential primaries of the political parties, SMBLF firmly reiterated its stance on the principle of zoning and power rotation between the North and the South as the fulcrum on which the Nigerian Federation has since independence been premised.

It, however, deplored the insensitivity of the People’s Democratic Party (PDP) and other political parties, including Action Alliance (AA), Action Democratic Party (ADP), Allied People’s Movement (APM), New Nigeria People’s Party (NNPP) and Young Progressive Party (YPP), for nominating Presidential candidates from the North for the 2023 election, describing it as a total disregard of the time-honoured principle of rotation.

On INEC’s preparations for the 2023 polls, the leaders also condemned what they called the haphazard manner in which the ongoing continuous voter registration exercise is being conducted by the Independent National Electoral Commission (INEC) in parts of the country, calling for proper management of the process and even distribution of the voter enrolment devices across the country to ensure that all eligible Nigerians, in all locations, are registered to vote.

“We hereby cautioned INEC, given certain disturbing reports, to abjure unwholesome practices that would distort the credibility of the 2023 general elections, particularly, in its application of technology through the Bimodal Voters Accreditation System (BVAS) and transmission of election results.’’

On ASUU strike, SMBLF expressed great concern over the continuous closure of Nigerian public universities due to the prolonged strike by the Academic Staff Union of Universities, and urged both the Federal Government and ASUU to take all necessary steps to urgently bring the situation to an end so that students can return to their lectures in the interest of the nation’s future and development.

Buhari AdministrationSMBLF
Share
Subscribe to our newsletter
Sign up here to get the latest news, updates and special offers delivered directly to your inbox.
You can unsubscribe at any time