....slumped having stood for hours on one spot under the scorching sun. 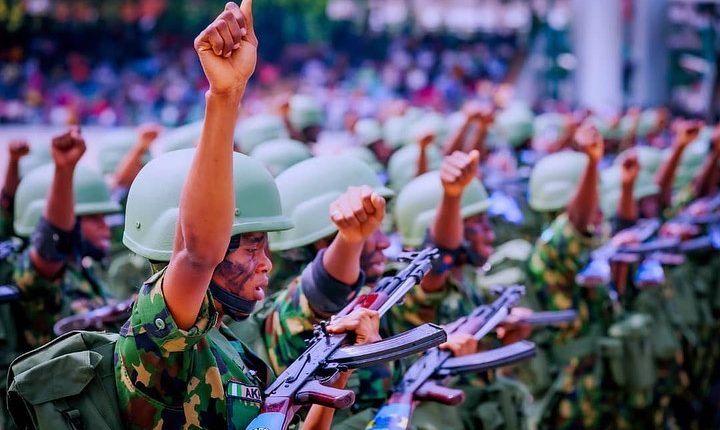 Apparently succumbing to  exhaustion, three soldiers slumped on Monday at the Eagles Square, venue of the military parade to mark June 12 Democracy Day.

The parade was attended by President Mohammadu Buhari and members of the Federal Executive Council.

The three soldiers, who were participating in the parade, slumped having stood for hours on one spot under the scorching sun.

Persecondnews reports that there was confusion at the scene but medical personnel quickly rushed to the parade ground with stretchers and whisked the collapsed officers to the medical shed close to where president Buhari was seated.

The ceremony, however, commenced soon after the officers regained their consciousness.

The ceremony featured performances by the Army, Navy, Air Force and the Police.

Buhari, who was the Special Guest of Honour, inspected the guards, and was followed by a military/police march past in slow and quick time.

Kingibe was addressed at the occasion as former Vice-President, Federal Republic of Nigeria, following the recognition of Chief MKO Abiola as winner of the June 12 1993 Presidential Election that was annulled by the then military junta of Gen. Ibrahim Babangida.

Others at the occasion include the Secretary to the Government of the Federation, Mr Boss Mustapha, Presiding Officers of the National Assembly, Service Chiefs, members of the Diplomatic Corps, and former cabinet members in the late President Umaru Yar’Adua administration.

Former President Goodluck Jonathan'Guards BrigadeNigerian ArmyParadePres. Buhari
Share
Subscribe to our newsletter
Sign up here to get the latest news, updates and special offers delivered directly to your inbox.
You can unsubscribe at any time

The Day in Pictures: Pres. Buhari and other top government functionaries at the 2022 Democracy Day celebration in Abuja.

Roasting of sex worker over alleged blasphemy against Holy Quran: Three suspects hauled up in court