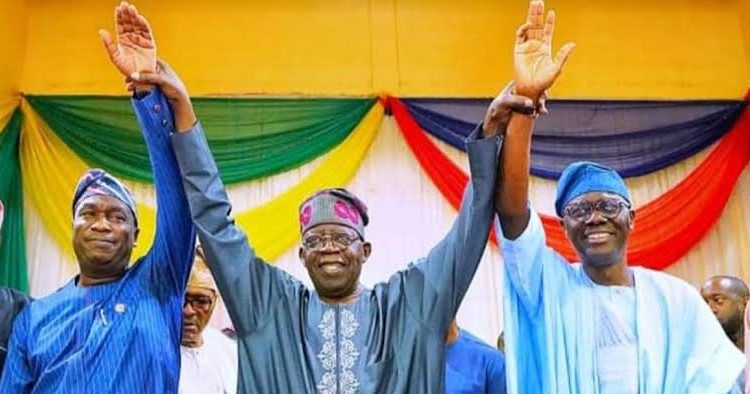 Asiwaju Bola Tinubu and former Lagos State Governor on Friday put an end to the waiting game and speculations about second term ticket for Gov. Babajide Sanwo-Olu, and his deputy, Dr Obafemi Hamzat, by announcing their
endorsement.

Tinubu has been silent about giving the APC ticket to Sanwo-Olu ahead of the party’s primaries later in May.

But in a tweet on Friday, Tinubu was quoted to have endorsed Sanwo-Olu and his deputy by the governor’s Chief Press Secretary, Gboyega Akosile.

Persecondnews reports that Akosile also released a video of Tinubu raising the hands of the governor and his deputy.

Tinubu had in 2018 denied the then Lagos Gov. Akinwunmi Ambode a second term with the governorship primary skewed against him, leading to the emergence of Sanwo-Olu.

Ambode had during the four-year tenure executed some landmark projects and reportedly refused to be teleguided by the powers-that-be in the state.

Ahmed Bola TinubuGov. Sanwo-OluLagos
Share
Subscribe to our newsletter
Sign up here to get the latest news, updates and special offers delivered directly to your inbox.
You can unsubscribe at any time