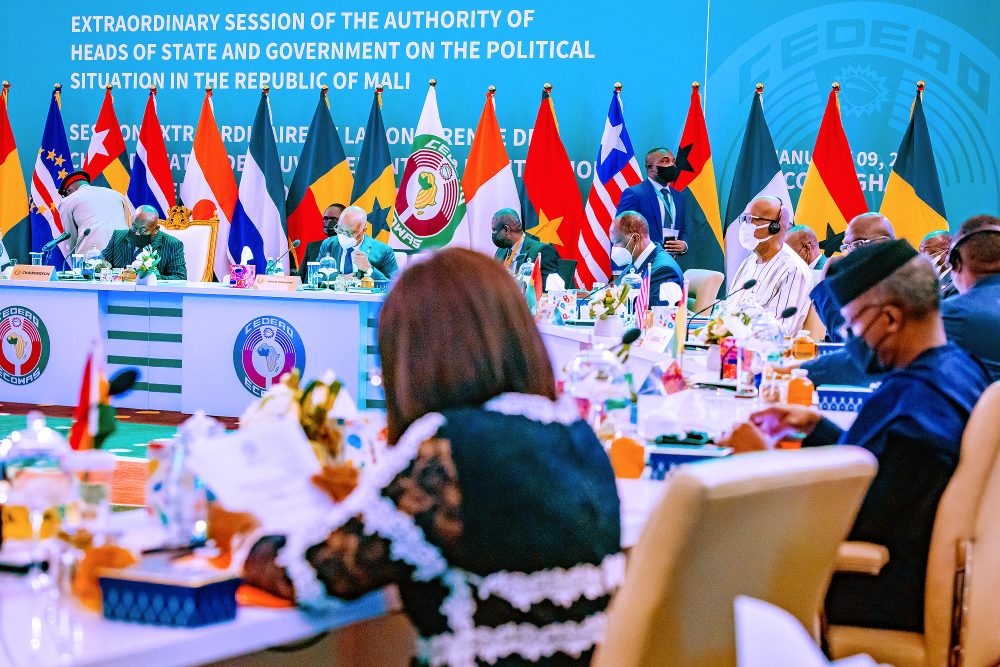 ECOWAS, the regional bloc, on Sunday announced further sanctions against Mali’s military-dominated interim authority including financial squeeze, border blockage and withdrawal of ECOWAS Ambassadors from Mali to force a return to constitutional rule.

Regional leaders at the end of their extraordinary summit in Accra, Ghana also said the ECOWAS Military Stand-by Force would be readied for any eventuality.

The Accra meeting followed the decision of the Col Assimi Goita-led interim government to abandon an original transition timetable, which had included elections next month after the military coup that toppled the government of elected President Ibrahim Boubacar Keita in August 2020.

Goita led another coup in May 2021, which elicited sanctions and the suspension of Mali from ECOWAS.

The Communique of the summit chaired by Ghana’s President Nana Akufo-Addo and Chair of ECOWAS Authority also reiterated the bloc’s opposition to the presence of private military contractors, a reference to Russia’s support to Mali, according to a report by Paul Ejime, a communication specialist on foreign affairs.

Malian authorities have accused France of abandonment for reducing its forces in the Sahel and Mali.

The French move forced the Bamako regime to approach Russia for support to deal with terrorists and Jihadist insurrections, especially in the northern and central regions.

This position has been strongly opposed by Paris and its Western allies and it is believed that France has a major influence on the tough regional squeeze of the Goita interim authority.

There are indications that the new sanctions could hit hard on land-locked Mali, especially ordinary citizens who might find it difficult to withdraw money from the banks with the ECOWAS freeze of Malian assets and finances at the West African Central Bank based in Senegal.

While the sanctions could make life uncomfortable for the interim government, further destabilisation of Mali cannot be ruled out.

With Mali and Guinea under interim military-cum-civilian adminustrations after military coups, there is the fear of further resurgence of military rule and recession of democracy in the ECOWAS region.

The region and across the Sahel are wracked by perennial insecurity with northern Mali as the epicentre of terrorists and jihadists’ deadly attacks also in neighbouring Niger, Burkina Faso and Cote d’Ivoire.

ECOWAS leaders have their job cut out for them at the beginning of a New year in a region also struggling with economic downturn compounded by the Covid-19 devastation.

ECOWASMali
Share
Subscribe to our newsletter
Sign up here to get the latest news, updates and special offers delivered directly to your inbox.
You can unsubscribe at any time

The Day In Pictures! VP Osinbajo represents President Buhari at the ECOWAS