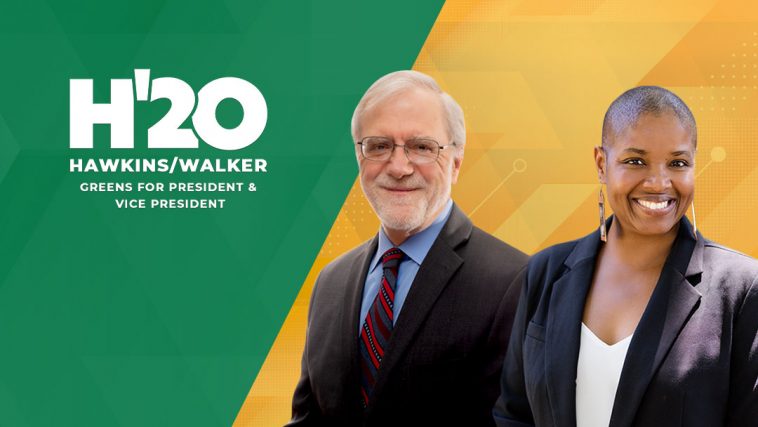 Republican Donald Trump and his rival Democrat Joe Biden are not the only two candidates on the US presidential election ballot, although they are the most high profile.

There are two other candidates on the ballot worth knowing.

An environmentalist with a blue-collar background, Howie Hawkins is one of the Green Party’s original members.

Having ran and supported socialist, anti-racism and causes against nuclear proliferation, the Green nominee said he hopes American progressives would vote for him as their plan B.

Her name might not exactly roll off the tongue but it has certainly grabbed the attention of people looking for something different.

Ms Jorgensen aims to not only be the first woman in the White House but also the nation’s first libertarian president.

She believes the government’s role should be reduced and says that people should be able to make their own decisions.

One example of that is in how she publicly disagreed with Democratic candidate Joe Biden on making the wearing of masks mandatory.

Some of her policies might echo Donald Trump’s, like a promised to bring US troops home from abroad – although Ms Jorgensen went a step further in a campaign advert.

“I will turn America into one giant Switzerland; armed and neutral. There’s no reason why we need to continue to be the policemen of the world,” she said.

People supporting Ms Jorgensen on social media are using the hashtag #TheyBothSuck and #IVoted4Jorgensen to explain why they are taking her side.

Although she says her campaign started out as a joke, Ms Jorgensen maintains that she is more qualified than Mr Biden or Mr Trump to run the country.

“When people are given the freedom and the liberty to live how they want to, they work hard,” said in a interview on NPR in May.

Her domestic policies place an emphasis on individual freedom and having a bigger say in what government does with taxpayers’ money. 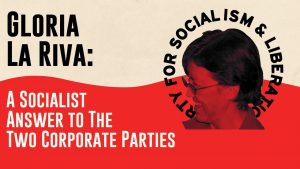 Their program includes making income, health care, education and affordable housing constitutional rights while shutting down U.S. military bases around the world and instituting a $20 an hour minimum wage. They would also nationalize banks and corporations. 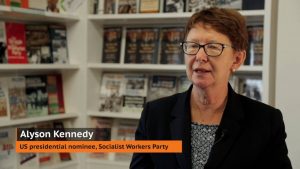 Alyson Kennedy, a Walmart worker and former coal miner is repeating her 2016 bid for president. Malcolm Jarrett, a catering company cook who has been active in labor protests and previously ran for Pittsburgh City Council, is the vice presidential candidate.

They support a federal public works program to pull the country out of the COVID-19 recession with union-scale wages to build hospitals, housing, schools, day care centers and crumbling infrastructure. They also want amnesty for all undocumented workers in the country.

Kanye West, billionaire rapper and record producer, has mounted an on-and-off campaign for president of the Birthday Party, shows up on California’s ballot as Rocky de La Fuentes’ vice president and recently talked about running in 2024. Michelle Tidball, a self-described biblical life coach, is his vice presidential candidate on the Idaho ballot.

West’s campaign website is a series of general statements like restoring faith in the Constitution and a sound national economy, restructure education and maintain a strong defense, each backed with a biblical quote.

Rocky De La Fuente, a successful California auto dealer who ran for president in 2016 on different tickets, ran unsuccessfully for U.S. Senate in multiple states in 2018, was briefly in the Republican party’s primary now has the support of several minor parties, is running as an independent in Idaho. Darcy Richardson, an author and historian who ran unsuccessfully for Florida governor and twice previously for president, is his running mate.

They are running on the Alliance Party platform that includes universal health care, revisions to the immigration system that gives undocumented residents a path to citizenship, combating climate change and fixing Social Security by raising the retirement age and the contributions cap.

Brock Pierce, a former child actor and tech entrepreneur, is a first-time candidate running for president. Karla Ballard, CEO of a web platform that allows people to exchange various skills or services and another first time candidate, is running for vice president 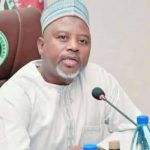 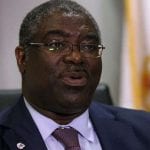