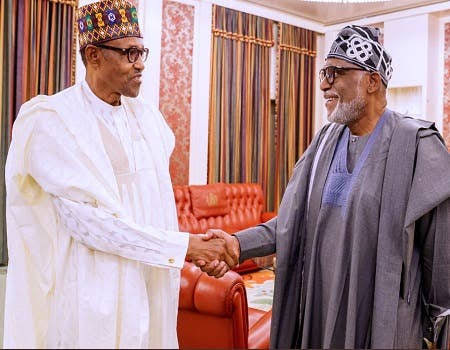 Still basking in the euphoria of re-election victory, Ondo State Gov. Rotimi Akeredolu, has teased the People’s Democratic Party (PDP) for losing the October 10 gubernatorial election, saying in pidgin “Ondo no be Edo.”

Persecondnews recalls that the refrain “ Ondo no be Edo’’ was first created by PDP when it won Edo governorship poll, beating APC to the second position, saying “Edo no be Lagos’’, making tacit reference to Asiwaju Bola Tinubu, a former Lagos State Governor and APC National Leader, whose intervention in Edo election failed to yield results.

Akeredolu, who was in Aso Rock, the nation’s seat of power on Tuesday, also advised his estranged Deputy Governor Agoola Ajayi, to resign “if he has honour’’.

He spoke to State House correspondents after he presented his Certificate of Return to President Muhammadu Buhari accompanied by Governors of Lagos, Kebbi, Ekiti Jigawa States as well as the Deputy Governor-elect, Mr Lucky Ayedatiwa.

“The deputy governor should vacate the post if he has honour and if he does not resign, his days are numbered as a new administration will soon be sworn in.

“If Ajayi is contrite, I’m ready to receive him with open arms,’’ Akeredolu told reporters, describing his declaration of some prominent Ondo indigenes as his enemies for life as mere political statement.

He said having won the election, there was no need for enmity or keep enemies.