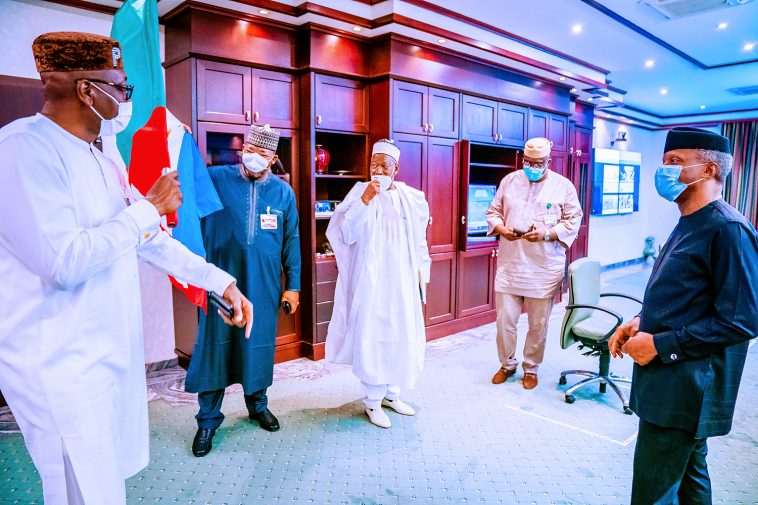 The Edo State governorship candidate of the All Progressives Congress (APC), Pastor Osagie Ize-Iyamu, has declared that the party had wrested the legislative arm of government from incumbent Gov. Godwin Obaseki with the sacking of the House of Assembly Speaker on Thursday.

He said his party now has 17 members out of the 24-member legislature that has put it in total control of the legislative arm.

Ize-Iyamu spoke with reporters at the Presidential Villa shortly after he received the party’s flag for the September poll from President Muhammadu Buhari.

Reacting to journalists’ queries that as a lawyer he condoned the illegality of APC members holding plenary outside the House of Assembly specifically in his sitting room, the APC flagbearer debunked the allegation, saying it is not true.

He said: “It is not the venue that legitimises parliamentary sessions, the members and the symbol of authority the maze, once it is in place, they can seat anywhere, they can deliberate and there are many examples to that effect.

“So what you saw yesterday is that the governor left the executive arm and invaded the legislative arm and took control. There is clear separation of powers. You have three governors here and in their state, the House of Assembly is autonomous. You don’t see the governors going there to go and operate.

“But the governor of Edo and the deputy took over the House of Assembly and vandalized the place; they said they are renovating it. Ask them, the budget that they passed including the revised one, is there a provision for the renovation of the house of Assembly? There is none.

“If there is no such provision, how can you begin to remove the roof during raining season if not because he has sinister motives. So that will tell you that, all what they were trying to do was to truncate legislative arm and stop them from sitting. So if anyone was doing a coup, they were the ones doing a coup against the legislative arm of government yesterday.

“And we are happy that our people have risen to it. Are you going to compare seven people to 17? In a legislative arrangement, seven people will want to lord it over 17 people? That is an aberration. I have told you that even to form a quorum you need eight, they don’t even have eight members. Two third is 16 and these people have 17, so clearly what has been done yesterday is a triumph for democracy.

“And we are happy that we have made it clear that APC is in charge of Edo State. The Governor has temporarily carried the executive arm to the PDP, but the legislative arm is fully for APC and that we have shown yesterday.”

“Are you saying I shouldn’t congratulate my party for doing the right thing?  Let me again congratulate the new speaker of the House, Hon. Victor Edoror and pray that God will use him to bring stability and development to our state,’’ Persecondnews quotes Ize-Iyamu as saying.

Asked if he is worried that pending graft charges against him in court and the “terrible things’’ex-Gov. Adams Oshiomhole said about him in the past might cost him the Edo election, Ize-Iyamu said: I’m not worried. In the heat of politics we tend to say a lot of things.  Comrade Adams Oshiomhole, who said those things then has also explained the circumstances under which he said it which is that he had to de-market  me to market his product.

“That he didn’t have much to say about his product and so the only thing that he had to do was to see how much he could de-market me. He has even gone ahead to apologize that most of the things he said, for example that  I am not a lawyer, he has realize is not true, that I am not a pastor he has realize is not true. He has apologized and moved on.

“I want to assure you that our support base is increasing by the day, we had 14 members House of Assembly before out of 24 but I’m sure you saw yesterday (Thursday) that they are now 17 and the Governor is left with just seven.

“I must also say that in Edo State House of Assembly where you have 24 members, to even be able to form a quorum, you need eight members. But today, the group with the Governor cannot even seat because they cannot even form a quorum. But even two third, which is needed to pass budget is 16 and we already have 17 and more are coming. So the support base for APC is strong and increasing by the day.’’

On Comrade Adams Oshiomhole being the face of his campaign, Ize-Iyamu denied that Oshiomhole was not the face of the campaign, accusing the PDP of “mentioning his name, talking about him and playing tapes as if he is the candidate.’’

Boasting that he is well known in Edo, he said:“ I am the gubernatorial candidate and Mallam Gani Audu is the deputy. I have lived there all my life, I have been Chief of Staff, Secretary to the State Government and we also have a local Director-General of the campaign, Gen. Cecil Esekhaigbe (rtd) from a Edo Central, who is well respected.

“Of course, the National body has also established a local council headed by no less a person than the Governor of Kano. So we are very strong and we are doing well. Of course, Adams Oshiomhole comes from Edo, he is an APC member and it is natural for him to campaign for our party but certainly he is not the face.

“Unlike what happened four years ago where maybe, the candidate could not speak and somebody had to speak for him. But anyone will tell you that everywhere I have gone, I have been the one speaking.’’

Ize-Iyamu also reacted to threats by INEC to put off the election citing pre-poll violence between the two camps, accusing the governor of beating the drums of war.

He said his billboards were being vandalized and that he had petitioned the Police Commissioner and the Director of DSS about the development.

“My billboards are being vandalized, nobody has touched their own. We wrote petitions to the commissioner of police, the Director DSS and they will attest to the fact that on a regular basis they are destroying our billboards. They are the ones that want to make the state ungovernable and I am sure you heard the governor say that himself and his deputy have immunity and so they can deal with anybody.

“I don’t have immunity, I don’t want to go to jail and it is not in my character to deal with anyone. I can assure you that on our part, we will conduct ourselves in a peaceful manner, our campaign will be done peacefully, and the elections by the grace of God will be done peaceful. We are only appealing to the PDP and the governor to do the same,’’ the APC candidate said.

On his endorsement by Buhari, he expressed gratitude to the party leadership and the resident for the reception accorded him at the Villa ahead of the election.

“The reception I got this morning, very warm, very fatherly. And let me also use this opportunity to debunk the story that has been going in the past one week from the opposition that Mr. President did not want to see me. There is no truth in it.’’

“I want to assure you that we will win overwhelmingly. The president gave me this flag and like I said, today is a very rare privilege because under normal circumstances, it is the national chairman that gives the flag but I think the president wanted to demonstrate his love for me and because of that he decided to personally take the flag from the national chairman and gave it to me.’’ 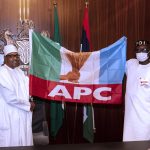 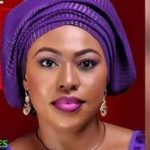