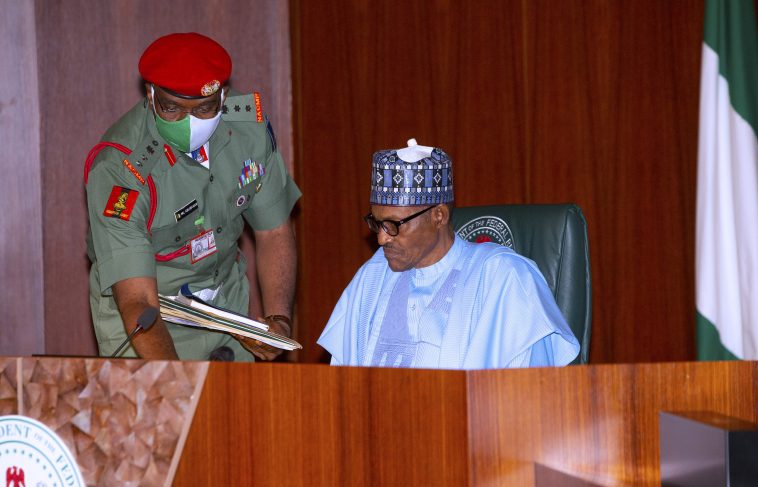 PRESIDENT BUHARI IN A VIRTUAL ECOWAS HEADS AND GOVT MEETING ON MALI 1. President Muhammadu Buhari during a virtual meeting of the Extraordinary Session of the Authority of ECOWAS Heads of State and Government on Mali crisis held at the Council Chambers, State House Abuja. PHOTO; SUNDAY AGHAEZE. JULY 27 2020

The Authority of Heads of State and Government of the Economic Community of West African States on Monday asked all warring factions widening political crisis in Mali to adhere to resolutions or face sanctions.

The virtual meeting attended by President Muhammadu Buhari, came up with the recommendations based on the roadmap produced by ECOWAS Special Mediator to Mali, former President Goodluck Jonathan.

According to the communique read by the Minister of State for Foreign Affairs, Zubairu Dada, after the meeting, the leaders also recommended the establishment of a National Unity Government in Mali within 10 days as an immediate step to end the political crisis.

The leaders said the resolutions if followed strictly, would save Mali from a repeat of the 2012 crisis, which ultimately led to a military coup and the expansion of terrorist groups there.

The video conferencing was coordinates by the President of Niger and current Chairperson of the Authority, Mahamadou Isso-Ufou.

The document released after the summit read by Dada and signed by President Isso-Ufou, explained the role of the unity government.

“The main task of this National Unity Government will be to deal with the consequences of the demonstrations, and to implement all reforms and recommendations issued from the Inclusive National Dialogue and to improve governance. In particular the implementation of the Algiers Agreements will need to be accelerated.

“Given the numerous challenges facing the country, Some members of Government will be nominated before the National Unity Government is formed. These are the ministries in charge of Defense, Justice, Foreign Affairs, National Security and Finance.

“The Heads of State and Government ask the relevant authorities to conduct quickly those inquiries to determine and identify those responsible for the violence that led to deaths and casualties as well as public and private properties destruction on July 10th, 11th and 12th 2020.”

At the parliamentary level, the ECOWAS leaders called for the resignation of the 31 members of parliament, whose elections had been in contention.

“The Heads of State and Government ask all political parties to endeavour to obtain the immediate resignation of all the 31 members of Parliament whose election is contested.

“These resignation will pave the way for by-elections. Pending these by-elections, the Parliament will operate with the 116 remaining members”, they stated.

As for the Constitutional Court, the following recommendation was made,  “The Heads of State and Government ask all the relevant institutions to facilitate its immediate recomposition according to legal provisions in Mali.

“The Parliament will propose its representatives after the resignation of the 31 members whose election is contested and the installation of the new bureau.

“In case of difficulty for the various bodies in designating their members to the Constitutional Court, the President of the Republic will use the exceptional power provided by Article 50 of the Constitution of Mali to nominate the 9 members.”

In addition to the above key proposals, the leaders called for the release of the “Honourable Soumaila Cisse, Leader of the Opposition, abducted since March 25, 2020” by the authorities in Mali.

The leaders noted that they were in “solidarity” with him, stressing the need for his urgent release to quicken the peace process.

To ensure the implementation of the peace proposals, the authority asked the ECOWAS Commission to put in place a monitoring committee to monitor compliance by all the parties.

The committee “will include representatives from Government, Parliament, the Judiciary, Civil Society, M5-RFP, women, the youth, with the participation of the local  Representative of the African Union the Uritet YatishanEtaiet by ECOWAS.”

It added that any group failing to comply with the implementation would be sanctioned by the commission.

Before arriving at the latest decisions, the leaders reviewed previous efforts to broker peace in Mali, including the role of former Nigerian President, Goodluck Jonathan, the ECOWAS Special Envoy on the Mali crisis.

The document gave the detailed review, “The Heads of State and Government of the Economic Community of West African States (ECOWAS) held an extraordinary Summit by Video conference on July 27th 2020.

“They examined the current socio-political situation in Mali, characterised by demonstrations initiated early June 2020 by a group which includes political parties, civil society organisations and various religious associations. This group is called the June 5 Movement Group of Patriotic Forces (M5-RFP).

“This socio-political situation is taking place in a difficult context for Mali, characterised by a serious security threat with recurring terrorists attacks, inter-community tensions in the Central part of the country, a social tension marked by a long strike of school teachers, a health crisis caused by COVID-19 pandemic and its economic and financial consequences.

“This current crisis is quite similar to the 2012 one when violent demonstrations led to a military coup on March 22, 2012. It is useful to recall that this 2012 military coup plunged the Republic of Mali into uncertainty and favoured the expansion of terrorist jihadist groups in the country.

“In order to avoid the repetition of this situation, an ECOWAS Ministerial Mission was deployed to Bamako from June 18 to 20th by the Chairperson of ECOWAS to help resolve the crisis. The Ministerial Mission established the diagnostic of the crisis, and proposed solutions along with some recommendations. Unfortunately these recommendations were not implemented and demonstrations continued. They were particularly violent on July 10th, 11th and 12th and led to numerous deaths, and casualties, with public and private property destructions.

“With the deterioration of the situation, ECOWAS appointed H.E. DR. GOODLUCK EBELE JONATHAN, GCFR, former President of the Federal Republic of Nigeria, as a Special Envoy to lead a Mediation mission to reduce tension. The Mediator conducted a mission to Bamako from July 15th to 19th 2020 and after meeting all stakeholders, formulated a Roadmap for a way out of the crisis.

“This roadmap was accepted by most stakeholders with the exception of the Strategic Committee of M5-RFP which maintained its demands, namely: The resignation of the President of the Republic of Mali; The establishment of a transitional regime; The establishment of a Commission of Inquiry to investigate the deaths on July 10th, 11th and 12th, and the  release of the Honourable Soumaïla Cissé, head of the Parliamentarian Opposition, abducted during the legislative elections.

“The M5-RFP has also announced that they will resume demonstrations.

“To curb this spiral of violence and reach a lasting solution, a Mission of five (5) Heads of State went to Bamako on Thursday 23July 2020.

“The Mission met the President of the Republic of Mali, H.E. Ibrahim Boubacar Keita, as well as the main stakeholders such as the M5-RFP Strategic Committee with their Spiritual Leader, the Presidential majority in Parliament, and civil society leaders. The mission indicated to all the stakeholders its vision for a necessary and quick way out of this crisis.

“Given the seriousness and the urgency of this situation, the Heads of State and Government suggested to hold an Extraordinary Summit with a view to examine the situation and take the necessary decisions to restore peace and stability in Mali.

“Following this Extraordinary Summit, the Heads of State and Government express their condolences to the grieving families and wish a prompt recovery to the wounded. They express deep concerns on this situation likely to increase instability in Mali, and in the sub-region. They reiterate their call to all Malian stakeholders to avoid violence and resort to dialogue for the resolution of dispute in a context marked by the multidimensional difficulties that Mali is facing.

“They congratulate the Mediator and the ECOWAS Commission for the Work done and express their support to all proposals put forth by the Mediation and included in the Roadmap.

“The Heads of State and Government insisted on the importance and the need to respect the Institutions of the Republic, especially the Constitutional means of ascending to power in conformity with the ECOWAS Protocol on Democracy and Good Governance.

“The Heads of State and Government noted that the main Malian Institutions are inoperative. It is therefore paramount to re-establish as quickly as possible, these sovereign Institutions necessary for the proper functioning of the State and the management of all issues raised by demonstrators.” 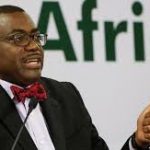 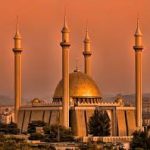