In Indonesia, authorities clamp down on Valentine’s Day celebrators 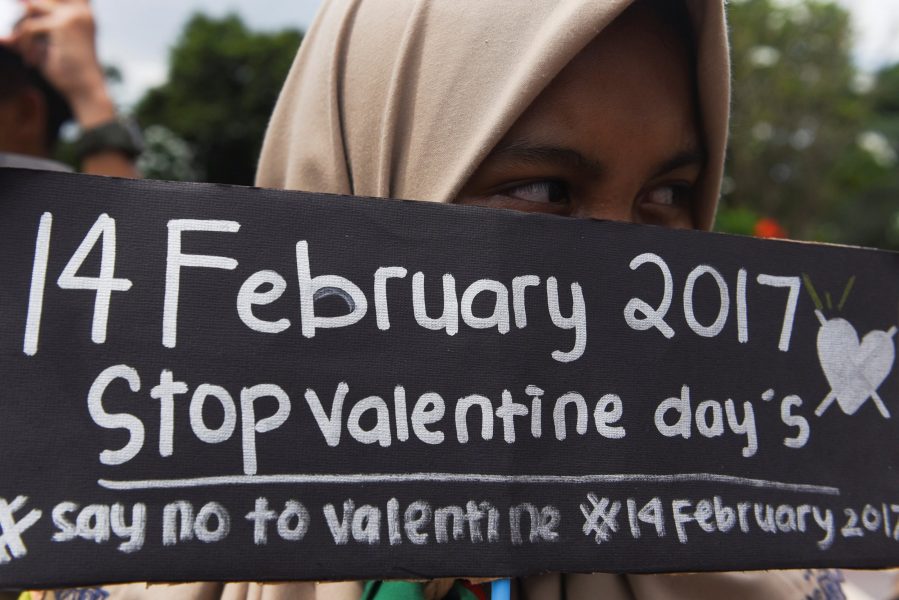 Share
…Lovers caught in hotel having fun
 Authorities in Indonesia, a Muslim state, have arrested two lovers in a clamp down on hotels for their amorous activities on Valentine’s Day on Friday.
Stores were reprimanded over condom displays while students were also cautioned against such immorality.
Makassar on Sulawesi island doled out some tough love with raids at hotels and guest houses Thursday evening which netted about two dozen unmarried offenders, including a German national.
“We caught the German with his Indonesian partner in a motel and they weren’t husband and wife so that’s why we arrested them,” Iman Hud, head of the local public order office, said.
The unlucky lovers were quickly released after a lecture about the evils of pre-marital sex, but five sex workers caught in the dragnet would be sent to a rehabilitation centre, he added.

“These social illnesses must be prevented. We need to remind the public to uphold our culture and ethics,” Hud said.

Valentine’s Day is controversial in parts of the majority Muslim nation, with many Islamic clerics and conservative Indonesians criticising its Western roots and what they say is its promotion of pre-marital sex.

Still, many others practise a moderate form of Islam and celebrate the day with chocolates and flowers for their loved ones, and displays were set up at malls and cafés in the capital Jakarta.

Back in Makassar, however, authorities were checking to see if shops had complied with an earlier warning not to sell condoms openly and check identification cards to make sure buyers weren’t underaged.

“They’re not supposed to be displayed and sold openly, particularly near snacks for kids like chocolate.”

Makassar’s acting mayor Muhammad Iqbal Samad Suhae insisted the measures were necessary to prevent his city from being paralysed by rampant sex and drug use.

IndonesiaValentine's Day
Share
Subscribe to our newsletter
Sign up here to get the latest news, updates and special offers delivered directly to your inbox.
You can unsubscribe at any time

Oluwo of Iwo allegedly punched another monarch during peace meeting