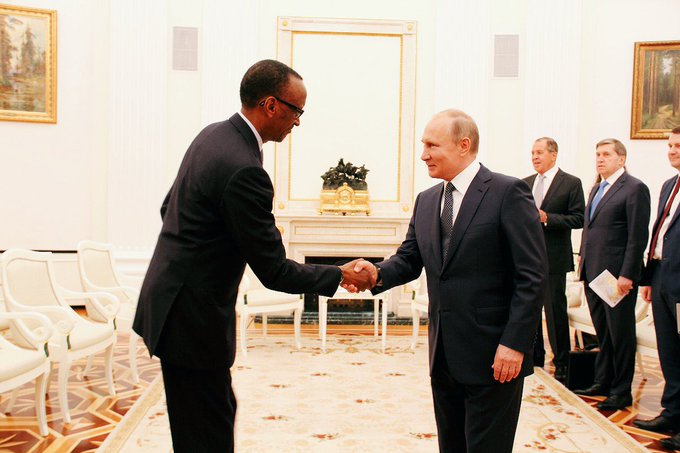 President Paul Kagame Tuesday in Sochi, met with President Vladimir Putin at a sideline meeting during the Russia/Africa Summit and Economic Forum.

Last year during an official visit of Rwanda’s minister of Infrastructure, Claver Gatete, to Moscow, an intergovernmental agreement on cooperation in the field of peaceful uses of atomic energy was signed between Russia and Rwanda.

The Russians will set up a Center for Nuclear Science and Technology in Kigali.

The nuclear power deal is set to modernize vital sectors such as agriculture, electricity generation, health, geology and mining amongst others in Rwanda, Per Second News gathered in Sochi.

The deal was boosted in May when a Russian government nuclear parastatal, Rosatom Global, reached an agreement to set up the nuclear plant by 2024–that the government says will help in the advancement of technology in agriculture, energy production and environment protection.

The cooperation will contribute to the economic growth and improve the quality of life of the Rwandan population, said Aleksey Likachev, ROSATOM’s Director General.

It has signed similar co-operation agreements with Kenya, Uganda and Tanzania even as questions over the appropriateness of the technology loom large.