Malnutrition: How RUTF saved 3-year-old Modu from the brink of death

3-year-old Adamu Modu (not real name), was left in the care of his grandfather, Modu Baba, an octogenarian from Dikwa Local Government Area, Borno.

Little Modu’s mother abandoned him when he was 6-month-old with his father, after their divorce. Modu’s father couldn’t take appropriate care of Modu as he was disabled, and struggling to survive. In order to ensure little Modu was adequately cared for, he gave him to his father, Modu Baba.

Baba, who was displaced from his home by insurgents, and lives in Bolori Internally Displaced Persons (IDP) camp, was left with the responsibility of catering for his grandchild, Modu. As an IDP, he struggles to earn a living by working as a security guard.

According to Baba, his grandchild Modu was faring well initially, but later noticed he was growing very thin and frail, with big stomach. Little did he know that his grandchild was showing physically signs of Severe Acute Malnutrition (SAM).

Speaking through an interpreter, Baba explained; “Modu was doing very well initially; always playing and laughing, until I noticed he was growing thinner and weak as each day passes by. With time, his ribs started becoming visible, his stomach was becoming bigger and he could hardly stand on his own without support. I knew he was sick, but I didn’t know exactly what was wrong with him.

“I took him to a UNICEF-supported medical clinic in the IDP camp, where I was told he was suffering from Severe Acute Malnutrition. I also saw other children with similar condition as Modu.

They commenced treatment immediately on Modu with Ready-to-use Therapeutic Food (RUTF). He took the RUTF for some months, and was back on his feet.

“I am so happy now because he is not sick anymore. He is also fat, can play, eat and drink now.”

Ready-to-use Therapeutic Food (RUTF), is a fortified peanut butter-like paste containing fats, dietary fiber, carbohydrates, proteins and essential micronutrients. A vast majority of children with severe acute malnutrition respond extremely well to treatment with RUTF. It ensures rapid weight gain in severely malnourished children and has improved the lives of hundreds of thousands of children over the years.

Poor feeding practices, such as inadequate breastfeeding, offering the wrong foods, and not ensuring that the child gets enough nutritious food, contribute to malnutrition. Malnutrition causes irreversible brain damage and compromised intellectual capacity in adulthood, leading to reduced productivity and an estimated 16% loss in the Growth Domestic product.

An estimated 2.5 Million Boys and Girls under the age of 5 Suffer from Severe Acute Malnutrition (SAM) every year in Nigeria. Also, at least 50 children are diagnosed with severe acute malnutrition every day at various communities and camps for internally displaced persons (IDPs), in conflict-ravaged Borno State, health officials have said.

According to Nutrition Sector annual projections, an estimated 371,000 Boys and Girls under the age of 5 in Borno, Adamawa and Yobe (BAY) states will suffer from Severe Acute Malnutrition (SAM), a life- threatening condition. According to the latest Nutrition Survey, the prevalence of Global Acute Malnutrition (GAM) among Boys and Girls aged below 5 Years is 11% in Borno, 13% in Yobe and 6% Adamawa, indicating very high levels of malnutrition according to World Health Organization classification.

The Nutrition Sector estimates that there will be 258,950 Boys and Girls aged below 5 Years suffering from SAM in 2020 in Adamawa, Borno and Yobe States. To ensure the provision of comprehensive treatment, N5 billion is needed to procure 258,950 cartons of Ready to Use Therapeutic Food for SAM treatment.

On this note, the Department for International Development (DFID), has committed a total of N18.5 billion to address the deteriorating nutrition-related crisis in Borno, Yobe and Adamawa states from April 2019 to March 2020.

A Nutrition Specialist, United Nations Children’s Fund (UNICEF), Aminu Usman, who made this known at a two-day media dialogue on Integrated and Timely Response to Nutrition-Related Humanitarian Needs, in Borno State recently, said the money was needed to enhance the purchase of Ready to Use Therapeutic Food (RUTF) in Adamawa, Borno and Yobe states.

While noting that a lot has been achieved in addressing the challenges of malnutrition in the region, he raised concern over new cases of severe acute malnutrition due to influx of new arrivals of internally displaced persons, lack of access to hard to reach areas and late presentation of malnourished children whose parents were ashamed to seek treatment.

“DFID has committed a total of £41 million (N18.5 billion) to address the deteriorating nutrition related crisis in Borno, Adamawa and Yobe states from April 2019 to March 2020.

“Nutrition sector estimates there will be 258,950 boys and girls suffering from Severe Acute Malnutrition (SAM), in 2020 in Adamawa, Borno and Yobe states. N5 billion is needed to necessitate procurement of 258,950 cartons of RUTF for SAM. Funding has been secured for 29,314 cartons of RUTF, there is a funding gap of N4.4 billion for procurement of 229, 636 cartoons,” he explained.

According to Usman, the affected community coping mechanisms was still low and any shock will result in further deterioration of nutrition status in the region. 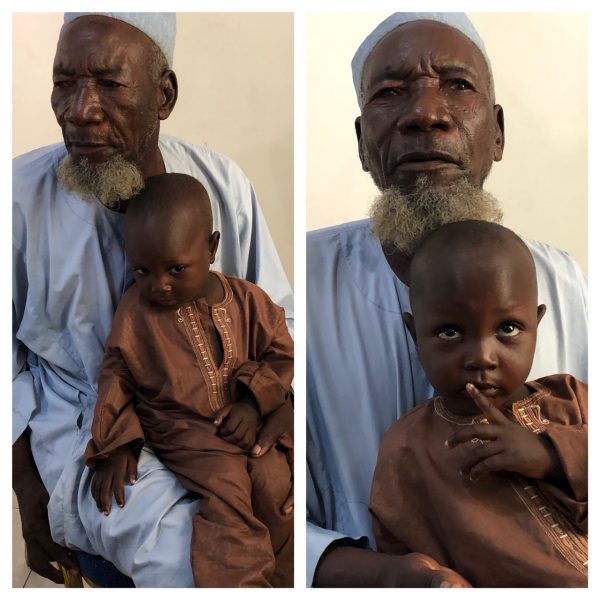 Little Modu with his grandfather after treatment for SAM using RUTF

AdamawaBornoDFIDIDPsInsurgencyRUTFSevere Acute MalnutritionUNICEF
Share
Subscribe to our newsletter
Sign up here to get the latest news, updates and special offers delivered directly to your inbox.
You can unsubscribe at any time

May 18, 2022
Prev Next 1 of 2,048
Subscribe to our newsletter
Sign up here to get the latest news, updates and special offers delivered directly to your inbox.
You can unsubscribe at any time
More Stories
Top Story