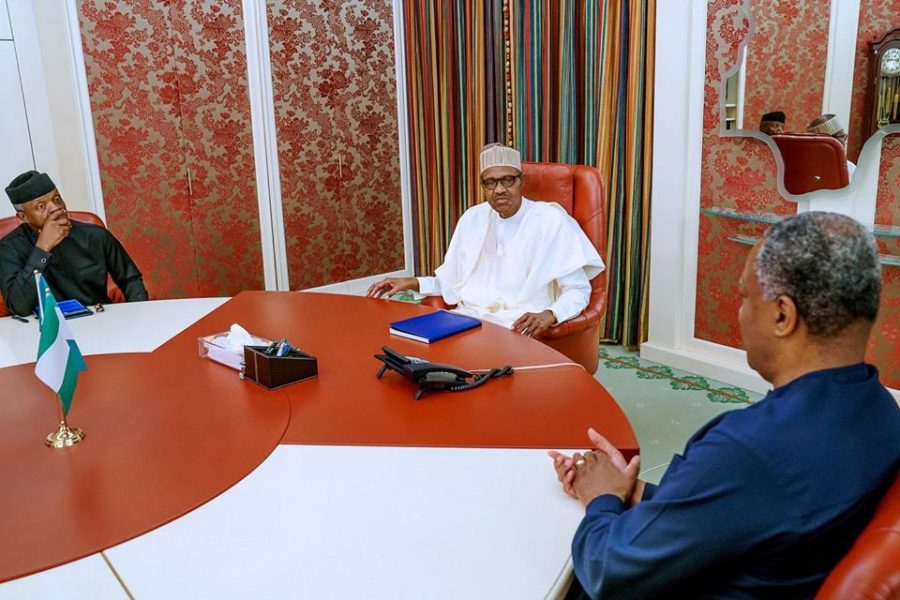 Share
President Muhammadu Buhari and Vice President Yemi Osinbajo are meeting with the Minister of Foreign Affairs, Geoffrey Onyeama, to to explore possible options including sanctions against the South African government, on the Xenophobic attacks against Nigerians in South Africa.
The federal government is also deliberating over possible actions from within, after some Nigerians carried out reprisal attacks against South African businesses in Nigeria including Shoprite, and telecoms giant MTN, thereby forcing the organisations to scale down operations.
Following the xenophobic attacks against Nigerians and other foreign nationals last week in South Africa, Nigeria has boycotted the World Economic Forum (WEF) on Africa 2019, holding in Cape Town, South Africa.
The Forum which kicked off on Wednesday had no Nigerian delegation in attendance, as well as some African countries who joined Nigeria in boycotting the event.
Some of the African countries that pulled out of the WEF are Rwanda, Malawi and DR Congo.
A source in the Presidency said: “President Muhammadu Buhari and Vice President, Yemi Osinbajo have taken a hands-on approach in resolving the Xenophobia issue with South Africa but they want everything done diplomatically.
“The boycott of WEF is another strong statement to the South African government and people because the Buhari administration will not stand and fold its arms after attack on any Nigerian citizen. This is the right step in the right direction.”
Persecond recalls that the Foreign Affairs Minister, Geoffrey Onyeama, met with the South African High Commissioner to Nigeria, Bobby Monroe, on Tuesday in Abuja, to express his displeasure at the Xenophobic attacks and to also condemn the attacks.
The Minister said: “We have registered our strong protest to the government of South Africa but most importantly, we have put forward to the South African government what we think will make a big difference.
“One, with regards to compensation for those who have suffered losses and most importantly, a security proposal that we believe will safeguard the security of Nigerians in the future.
“We are hoping to see the possibility of sending some security agents, deploying them initially in the Nigerian High Commission, to work closely with the South African Police Force.”
Geoffrey OnyeamaMTNMuhammadu BuhariProf. Yemi OsinbajoShopriteSouth AfricaXenophobia
Share
Subscribe to our newsletter
Sign up here to get the latest news, updates and special offers delivered directly to your inbox.
You can unsubscribe at any time

Osun half marathon to sensitise the people on physical exercise, fitness—Oyetola