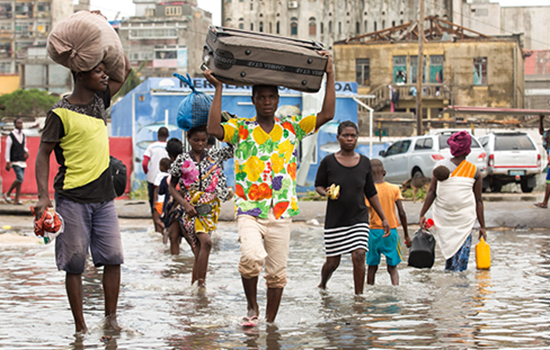 Five months ago, Cyclone Idai ripped through the Southern African region, causing a massive humanitarian disaster that affected three million people. More than a thousand perished, while 200,000 lost their homes, many of whom are still to this day living in refugee camps.

Economic losses were estimated at more than $1 billion across the affected countries – Mozambique, Malawi, Zimbabwe and Madagascar. However, the devastating impacts of such disasters – especially for Least Developed Countries (LDCs) and small states in Africa – tend to be deeper and more far-reaching than initial reports would indicate.

The consensus among scientists is that extreme weather events such as droughts, floods, cyclones and landslides, are now occurring with increased frequency and greater intensity. There are long term consequences such as desertification, erosion of arable land, and changes in ecological balance, which can prove difficult to reverse. As a result of climate change, there is a heightened risk that while vulnerable Commonwealth states are recovering from one natural disaster, another will strike.

For instance, Mozambique was still reeling from the impact of Cyclone Idai in March when Cyclone Kenneth – the strongest in the country’s history – bore down barely six weeks later. In fact, there have been no fewer than 13 emergency events in Mozambique since 2015 (mirrored by 12 in neighbouring Malawi). Indeed, 109 disasters recorded in the country over the past 50 years have incurred more than $1.15 billion in economic damage.

Statistics such as these demonstrate the vital importance for all our member countries of planning long term strategies to manage disaster risks and of building resilience through disaster preparedness, as was acknowledged by Commonwealth Heads of Government when they met in 2018.

They affirmed their commitment to the Sendai Framework for Disaster Risk Reduction – the international agreement for mobilising governments, private sector and other stakeholders to reduce risks and build resilience. By doing so, our leaders acknowledged that rather than merely responding after disaster strikes, it is more cost-effective and prudent to invest beforehand in prevention, protection and preparation.

Yet disaster risk reduction remains a relatively low priority for international development finance. Apart from the costs of post-disaster reconstruction and response, of every $100 spent on international aid in the past two decades, only 40 cents have been spent on pre-disaster risk management.

Moreover, the field of disaster risk finance is complex and evolving, making it even harder for small states and LDCs to tap into the limited funding available. Information is fragmented, and donors and lenders often have widely varying procedures and requirements that need to be navigated in order to unlock finance.

To tackle these impediments, and to help create a more streamlined and integrated approach to accessing funds, the Commonwealth will soon be launching a new disaster risk finance portal. This web-based platform, designed to make it easier for capacity-constrained governments to gain access to the funding they so urgently need, will be ready for preview when our annual Commonwealth Finance Ministers Meeting, convenes in Washington DC this October with Cyprus in the chair.

As well as helping governments to find what disaster finance instruments are available, the portal will assist them with identifying those that are most suited to their particular needs and circumstances. A one-stop-shop, with information collated from a range of sources and clearly presented, will save governments time and effort, and help them to make more informed decisions on disaster preparedness and response.

The theme for our Commonwealth Finance Ministers Meeting – Avoiding Debt Crises – also strikes a chord, as disasters push many countries into taking on emergency loans to rebuild and recover. For most low and middle-income countries, such public debt easily becomes unsustainable, and makes them vulnerable to the additional high risk of debt distress.

The Commonwealth has an impressive record of successful advocacy to bring to international attention the difficulties associated with managing debt issues – and of offering practical solutions. Last month, we launched Commonwealth Meridian, our state-of-the-art sovereign debt management software. It builds on the successes of the Commonwealth Debt Recording and Management System (CS-DRMS) which over recent years has been used by more than 100 agencies – including the finance ministries, treasuries and central banks of 60 countries – to manage more than $2.5 trillion of public debt.

This complements the work of the Commonwealth Finance Access Hub set up in 2016 to help small and vulnerable states make successful funding applications for projects that will help them adapt to climate change and mitigate its impact. To date, the hub has helped countries gain access to $25.3 million, with a further $367.4 million in the pipeline. It does so by embedding long term specialists within ministries to provide expert advice and to build local capacity for the longer term.

Tools such as these, together with many other projects and programmes and advocacy strategies, are components in a suite of support offered by the Commonwealth collectively so that all our members are better equipped and ready to cope with disasters, including those related to climate change.

Our combined Commonwealth purpose is to reduce the number of people being pushed into poverty and food insecurity by recurring natural disasters, and whose opportunities to share the benefits of inclusive and sustainable progress are impaired when economic growth falters. Where the planning and wherewithal to assist people with recovery from trauma and to rebuild their lives is lacking, community cohesion and nation-building can also be severely compromised and set back. Without sustained action to mitigate risks and build resilience, hopes of achieving the Sustainable Development Goals by 2030 are slender.

By mobilising multilateral action, particularly in support of those who are marginalised or more vulnerable, with the stronger working alongside the less secure, we are able to build defences against disaster which may be needed by any of us at any time. So the Commonwealth shines as a beacon of hope for a more harmonious world, and for cooperation to sustain the health and well-being of our planet.

AfricaCommonwealth
Share
Subscribe to our newsletter
Sign up here to get the latest news, updates and special offers delivered directly to your inbox.
You can unsubscribe at any time