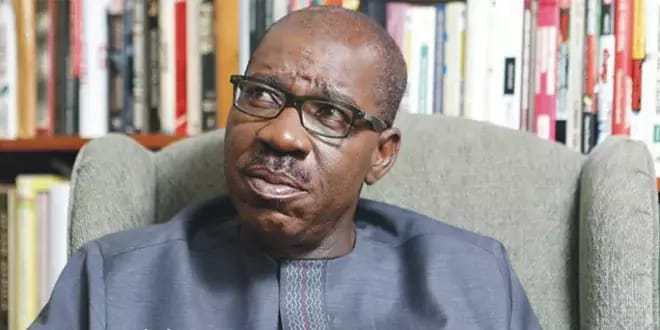 Share
•’This illegality will not stand,’ Obaseki reacts
The Senate has given the Edo State Governor, Godwin Obaseki, an ultimatum of one week to issue a fresh proclamation letter for inauguration of the Edo State House of Assembly.
The Senate however threatened governor Obaseki that at the expiration of the ultimatum and failure to issue a new proclamation as against the previous one, the National Assembly would take over the Edo Assembly.
The chairman of the Senate committee and Deputy Chief Whip, Sabi Abdullahi, presented the report at plenary on Tuesday.
The Senate further asked the governor and the Clerk, Edo State House of Assembly to formally inform all the 24 members-elect of the new proclamation, through media adverts in print and electronic media in conformity with parliamentary best practice.
The Upper Chamber said: “In the event that a new proclamation is not issued as recommended within the period of three weeks, the National Assembly is at liberty of invoking section 11, subsection 4 of the 1999 constitution of the Federal Republic of Nigeria (as amended).”
The Senate had earlier set up an ad-hoc committee to investigate the crisis in the Edo State House of Assembly, where factions have emerged; one loyal to Gov. Obaseki and the other to his predecessor and former benefactor, Adams Oshiomhole.
The Committee which headed by Sabi Aliyu Abdullahi, was given two weeks to complete its assignment and report back at Plenary.
Other members of the Committee are Senators Nicholas Tofowomo (PDP, Ondo South); Chukwuka Utazi (PDP, Enugu North); Gabriel Suswam (PDP, Benue North East); Eremienyo Biobarakuma Degi (PDP, Bayelsa East); Aishatu Ahmed Dahiru (APC, Adamawa Central), and Babba Kaita Ahmad (APC, Katsina North).
The committee expressed concerns over the alleged improper inauguration of the Seventh House of Assembly on June 17, adding that nine out of the 24 elected members were sworn in without the knowledge of the other 15 members-elect.
It was also alleged that the clerk of the house secretly inaugurated the nine members-elect at about 9.30p.m. which, according to him, was outside the time of legislative business.
However, the resolutions of the Senate did not go down well with the immediate past Governor of Imo State, Senator Rochas Okorocha, as he described the action of the Senate as “overreaching” itself.
Okorocha, in his contribution, cautioned the Senate against what he believes was “an attempt to overreach itself with powers and jurisdiction not granted to it”, adding that the Senate should not to involve itself in a matter which according to was the “internal family affair”of the APC which he said was better resolved by leaders of the party.
Reacting, governor Obaseki said “this illegality will not stand,“ as he described the Senate order as unconstitutional and a disregard for the Principle of Separation of Powers
Obaseki who said this through a statement signed by the Secretary to the State Government, Osarodion Ogie, claimed that the order was propelled by “powerful persons who want to set Edo State ablaze, merely to satisfy their thirst for power and control.”
“This move was not unexpected in the light of the enormous political pressure, which had been brought to bear on the Officers and Members of the distinguished Senate by the highly placed and powerful persons, who are intent on foisting their will and choices on the good people of Edo State,” he stated.
Adams OshiomoleAPCEdo house of assemblyGodwin ObasekiNational AssemblyPDPRochas OkorochaSabi Aliyu AbdullahiObaseki
Share
Subscribe to our newsletter
Sign up here to get the latest news, updates and special offers delivered directly to your inbox.
You can unsubscribe at any time

2023: Naming a successor will create problems for me- Buhari