IGE, OKE AND THE CONTINUING POLITICS OF IDEATION 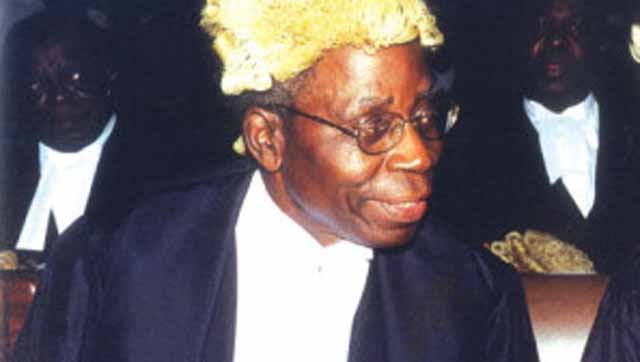 Bola Ige left a legacy of a puritanical rhetorician in the nation’s politics. He spoke the proverbial Queen’s English with an uncommon cadence, matched with a clinical diction and easily caught the attention of listeners with a depth, laced with ideas and progressive philosophies. Check this important instance: Military leader Abdulsalami Abubakar had then asked politicians to assemble and decide the future of Nigeria’s politics, after the demise of Maximum Ruler, Sani Abacha. Venue was at the Towry Coker wing of the International Conference Centre. In audience were the cream of the Nigerian political class, comprising men and women of different political hues.

It was a de-ethnicised, detribalized and integrated gathering. All seated, the moderator beckoned on the late politician, whose hands were now up, signifying an intention to speak  and who was supported by a cross-section of the assembly to articulate their plans.  The man, once christened the Cicero of Esa-Oke, stepped on the microphone and began.

His voice, oscillating between the Mezzo, the Contralto, and the Tenor, was good enough to still the hall, just as it suspended them for the next sentence, evening up to deep meanings in the senses the speaker was making.  He was measured, penetrating, and deliberate. When he was done, his audience applauded to know end, as he had exhausted their hearts’ desires.  Bola Ige was celebrated. He was a man of ideas, rich with content and possessing a great power of conveyance. There was probably no need for anyone else to speak, afterwards, save for the replica delivery courage of Orji Nwafor-Orizu, who complemented from a “youthful” paradigm.

The Esa-Oke native proceeded, therefrom, to be a definer in the post-military era politics, playing key roles in political flows and governance, until he was cut- down by the assassin’s bullet, in his modest Ibadan home. Long gone, it would seem his pattern has also gone. But see: nature often has no place for vacuum. It might be tough to spot a mathematical resemblance. But resemblances would come all the same. Nature propels, in shapes and sizes, through learnings, via experiences and by way of understudying. Nature is beautiful, in an ability to replace, to reactivate and revive past and extant processes and procedures. It is the reason the past may be gone, but the past still lives on. It is also the reason there could be improvements, progressions and growth, despite the beauty of yesterday.

Memories, remembrances and nostalgia, might yet have their places over things gone, but the fact of continuity runs deep in the affairs of men. It is why the legendary Uncle Bola Ige may be no more, but there is a Busayo Oluwole Oke, incidentally stepping out from the Bola Ige Esa-Oke vicinity, to continue the ideas and projections of the legend and making a qualitative mark from his own anecdotal “little corner”, with great potentials for excellence.

In the first instance, however, let us see this context: Oluwole Oke has hitherto essentially operated from the prism of the Federal House of Representative. The population of the place is relatively large, at 360. Almost a crowd, it could drown, obfuscate and becloud the potentials of an individual. It could birth anonymity, and muffled the voice of even a Bola Ige. The population challenges the observer to be thorough in the recognition of quality. In nature, as well, there would always be a star, or stars.  Identifying stars requires some attention to detail and with good eyes as a means. There have been stars amidst a crowd. There have been stars in the Federal House of Representatives. There are still stars, even as I write.

The legislature may be suffering from a perception of a self-aggrandizing lot, but the perception has regularly led to the danger of generalization. It is why tarring a whole with one brush is problematic for epistemology. And the more reason the unique identities of ideas and action men, like Oluwole Oke, would yet spring out. Patterned, purposeful and as rhetorical as the departed Bola Ige, Oluwole Oke is not your regular, stereotypical legislator.

Coming into politics from a business background and with interest in fiscal and monetary policies, education, security and defence management, micro-economic management, and multi-lateral integration, he performs from a pedestal of change, of progress, combined with zeal to leave a legacy. Thus far, Oke knows the pulse of his people, sensing their cynical disposition to men of power. He relates with the predilections of his class, spotting their limitations at the level of a propensity to be self-serving. He envisions tomorrow, as a day of reckoning, and is in terms with the difference he could make, so that tomorrow can exonerate him.

Oke is therefore at home with yesterday, today, and the offerings of tomorrow, over-morrow, and ever after. His missionary records in the House Defence and Procurement Committees are reference points. Check the Defence Committee for instance. First, he was committed in the drive for accountability, marshaling scary military minds, on transparency, accountability and openness, in a traditionally and statutorily reticent sector, needing a new wave of improvement in a collective quest to secure the nation’s borders and to deal with internal insurrection.

In the process, he crossed paths, ruffled feathers, but managed to survive, until his passion for service delivery was identified as his reason. He did no less in procurement, the forte where this writer first encountered him. Over here, he was focused on the mission and the vision of the reform, highlighting the details of quality, competition and value-for-money, which the programme came with. The procurement reform was to ensure the closure to previous losses in the government contracting and expenditure process.

Oke led the expansion of ideas on the scope and perimeters of the transformation, through the legislature. He operated from the point of view that implementation is partly a function of understanding and meaningful exchanges. He regularly brought this to the fore, while he functioned as the house chair on procurement. In the two committees, as well, Oke was noted for an easily differentiated over sighting, not one ridded with harassments, intimidation, or coercing,  but rather with intellection-all geared towards performance improvement, productivity enhancement, efficiency management and sustainability.

Upon his re-election into the house, Oke has begun again. Though not yet at the level of committee performance, but through elevated political competitiveness. He aligned with like minds, including popular Ndudi Elumelu, effervescent Lynda Ikeazu and the active others like Anayo Edwin, Gideon Gwadi, Toby Okechukwu, Adekoya Abdul-Majid, Lego Idagbo, Nnoli Nnaji, and Victor Nwokolo. Others are Chris Azubogu, Sylvester Ogbaga, Edwin Anayo, Toby Okechukwu, Offor Chukwuegbo and Darlington Nwokocha from The Patriots group, and together they engineered the 9th Assembly Progressives, comprising 60 non-APC Members that saw to the emergence of Speaker Femi Gbajabiamila.

With the group at his behest, and although to the revulsion of his party, Peoples Democratic Party (PDP), Oke moved to demonstrate the glory in bi-partisan integration, sometimes important for institutional stability and growth. He was reportedly not motivated by prebendal considerations, or some anticipation for prime committee placement, but rather the discovery of the possibilities in the union of minds across aisles. He could not have been otherwise with his successes in business, his experiences as a ranking member and his personal abilities to excel, but was rather propelled by the greater glory in communion.

And to the usually ephemeral party suspension, he volunteered: “It is unfortunate if the party suspends its most loyal member for towing the path of honour and constitutionalism. I owe my party and its leaders a duty of care to advice appropriately as one of the ranking members of the House. I have discharged that duty. I advised my party leaders about our House Rules provisions about nomination of our leadership. The PDP alone cannot do it without other eight political parties. On speakership, the PDP had no candidate. I follow my conscience. I followed what my constituents clamored for. I followed practices and procedures” Just another bit of his philosophical, epistemic tendencies. Bola Ige may be gone, but it is morning yet for a protégé. Bon Vogage, Busayo Oluwole Oke.

FG, States collaborating to get over 10m out-of-school children into classrooms- Osinbajo