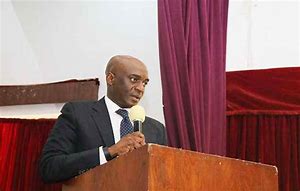 A few hours before Governor Ifeanyi Okowa of Delta State formally announced his unexpected appointment as Secretary to the State Government, Chiedu Ebie was lounging at home reflecting on the past four years and relishing what is now a short break from the daunting task of governance, policy and politics. His tenure as Commissioner for Basic and Secondary Education, during which he led the ongoing reforms in productivity, work culture of employees, students’ performance as well as infrastructure, was a success.

Though Ebie, 48, was one of the appointees tipped to return as a Commissioner because of his sterling performance in the strategic Education ministry, no one saw this new appointment coming; not even those in the governor’s inner circle. I know this because my sources in that government remain authoritative despite my decision to keep a distance from the affairs of the state for personal reasons.

It is not surprising that Ebie’s emergence as Okowa’s pick for this strategic office has elicited mostly positive reactions. Many have lauded his competence, diligence and his performance in the last four years.

“If we were to judge all Oga’s appointees by performance then Chiedu is clearly number one. He really impressed and shocked all of us considering this is his first time in government. He is a reformer,” one senior official in the state said.

“Okowa goes for professionalism” – Felix Tony Nwaka stated when he heard of Ebie’s appointment as SSG.

“Today, H.E. Dr. Ifeanyi Okowa, Delta State Governor, activated the engine room of the new government with the appointment of Barr. Chiedu Ebie as Secretary to State Government and Mr. David Edevbie as Chief of Staff…. Ebie and Edevbie are outstanding technocrats…” Nwaka a former commissioner in the state during the Uduaghan administration said in a post on his Facebook wall following the announcement. (Edevbie had served as commissioner for Finance).

A greenhorn in governance and politics until his appointment as commissioner in 2015, Ebie, was a Lagos-based lawyer specialising in commercial law. Not many thought he would do exceptionally well in public service because of the intrigues often associated with the civil service and government. But this greenhorn is different as he tuned out to be a reformer. He took on his workforce and got better productivity and performance from them. (They don’t hide or sit on contractors’ files anymore to demand bribes! I figured… Lol.)

He was focused on his mandate and repositioned the education sector of the state for better times ahead.

“Things are entirely different in our Ministry today because of the Honourable Commissioner. We do things differently and speedily now here. We are a wholly functional Ministry with everything we need domesticated here, including architects and civil engineers drafted from the Ministry of Housing that design and supervise the reconstruction of our primary and secondary schools,” a Director in the Ministry said.

During his tenure as Education commissioner, many schools were rebuilt statewide and teachers were retrained with Governor Okowa’s support. Though many schools in the state are still not in good shape, hopefully, a new commissioner will continue their rehabilitation and reconstruction.

I have always wholeheartedly supported reformers in government without apologies when I find them because I know that Nigeria desperately needs them to get us out of our self- induced hardship.

With the quality of Governor Okowa’s first appointments, I expect the governor to sustain the momentum by announcing a full cabinet made up of men and women of proven track record than those that served in his previous cabinet (Many did not deserve to be there like I said when they were appointed).

Ebie will be sworn in Monday by the governor into this very strategic office. How he manages this role could advance the case for more appointments into political offices from the private sector.

*** Austyn Ogannah, the Publisher of THEWILL NEWS and President of the Online Publishers Association of Nigeria, OPAN, wrote from Beverly Hills, California

Chiedu Ebie
Share
Subscribe to our newsletter
Sign up here to get the latest news, updates and special offers delivered directly to your inbox.
You can unsubscribe at any time