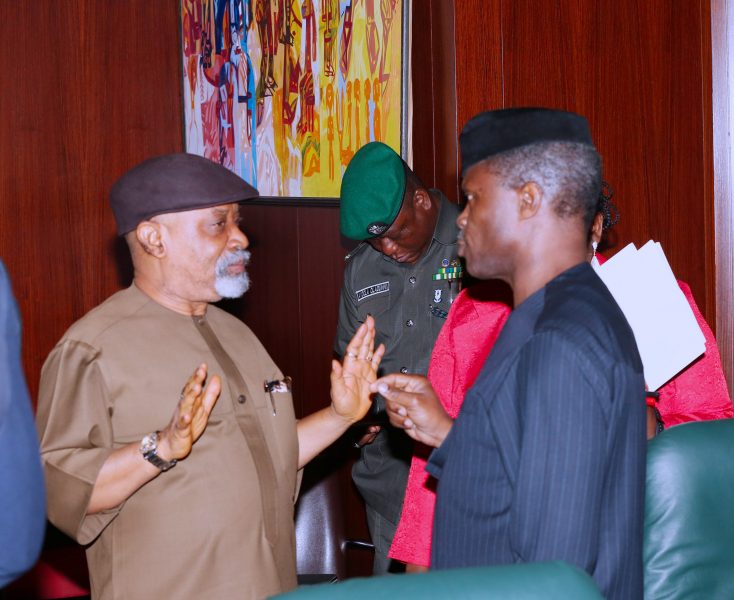 The Minister of Labour and Employment, Chris Ngige, has accused Nigeria Labour Congress President, Ayuba Wabba, of leading a band of thugs to his residence.

Ngige accused the Nigeria Labour Congress President of equating himself to President  Muhammadu Buhari because he answers president of NLC, and sees the NLC as the secondary arm of government.

Ngige said he will not be blackmailed by the Nigeria Labour Congress (NLC), insistence that ex-labour leader, Frank Kokori, be allowed to head the Nigeria Social Insurance Trust Fund (NSITF).

According to him, the provisions of section 4(a) of the NSITF Act is very clear on the sole responsibility of the Minister of Labour and Employment to nominate a neutral, fit and proper person for the approval of the president for the Chairmanship of the board.

He added that Kokori was not nominated because he is not neutral.

Speaking on the allegation that he sent thugs to attack workers at his house in Asokoro, the minister described the report as misleading and unfortunate, insisting that NLC led by, Wabba, were hooligans who he was going to sue for arson.

Ngige said: “Well, I just read the dailies today and I saw that story. It is a very fortunate misleading story because the scenario that emerged yesterday (Wednesday) was that I was woken up at 5am by my wife who reported to me that the security men were having problems with some strange fellows at the gate of the house. And that some people were also on the walls of my home, that they arrived there by 4:30am.

“When the security people accosted them, they discovered that it was the President of the Nigeria Labour Congress himself that came physically with two tankers, one laden with petroleum, the second was half empty. One was put at the gate of my house and the second at the gate of my neigbour’s house.

“When I heard the story it was very strange. When I looked from upstairs I saw that the tankers were actually blocking the entrance to my house. I came down and asked for the chief detail who told me the whole story. And it emerged that they even had a scuffle with the president of the NLC when they were struggling for the key to the tanker.

“So I went back and made some calls to the Commissioner of Police FCT, Director SSS and also the Federal Road Safety to see if they could move the vehicles.

“Picketing does not mean that you go to peoples private residence because you don’t know who occupies there. For example in my home, my wife, my children and the children of my domestic staff and security personnel were trapped. My neigbour, his wife and children couldn’t go out. It is obstruction, it is against the law of the country. Then putting a tanker with petrol is arson, the place can be caught on fire, the entire street could have engulf on fire. I don’t know what to say.

“So, I was surprised to read about thugs and people hospitalised, people beaten. I have tried to do some investigations and enquiries and from my preliminary enquiry and the reports I got, it looks like the NLC people disagreed with the people they brought to my house. I understand that they were contracted to work till 10am which is council time, the aim being to obstruct me from going to council. I left my house at 8 o’clock, a friend picked me up and I was able to make it to council.

“So, I am very very distraught, my family is traumatised, the people in my house are traumatised, my domestic staff with families are traumatised, even my neigbour and his wife couldn’t do their business for the day. Those tankers were removed around 6pm.”

“Their grouse is the inauguration of the NSITF board. We had fixed the date for April 18th and they invaded the place with thugs and disrupted the function. We had postponed the function and said we were going to fix another date for inauguration but since then, they have been maligning my character and integrity because I am the Labour minister. And they forget that according to the International Labour Organization (ILO) convention, I am what they refer to as the competent authority. Mr. President, Mr. Vice President, Mr. Secretary to the Government of the Federation will not come and do Labour matters. But, it is an obtuse thing we have here.

“The Labour people led by Wabba feels that they are secondary arm of government and he answers president of NLC, so he equates himself with the president of Nigeria. But there is only one sovereign authority of Federal Republic of Nigeria and for today by the grace of God, is President Muhammadu Buhari.

“The Act setting up the NSITF gave Labour two nominees, private sector under NECA two nominees. Labour appropriated the two for NLC and made a nomination and government has also made a nomination. What we are doing now is that we have proposed and the government has approved a fit and neutral person, not a government officer, not a Labour coloured man and not a private sector man. That is what obtains in tripartitism and we exhibited it for you all to see under the national minimum wage tripartite committee.

“Ms. Amal Pepple is a neutral person that has experience and background as a former permanent secretary, former minister of housing, former head of service of the federation and even a former clark of the Senate. So she was a round peg in a round hole. We are also going to put a square peg in a square hole. We are going to go ahead and inaugurate the board, we will not have any further distractions on  this and we are consulting to fix a date for the inauguration immediately.”

Asked if he was summoned to the Villa because of the matter, Ngige said: “No. Mr. President did not summon me, I came for a meeting and I have finished my meeting and I am going.” 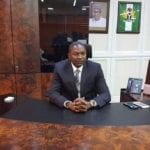 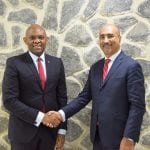