Boeing 737 with 140 people aboard skids off runway into river

After about two years of evading trial, a former Comptroller-General of the Nigeria Customs Service, Abdullahi Inde Dikko and two...
Read more

Another teenage female student gang-raped, stabbed to death in Ibadan

Barely a week after a female university student was gang-raped and murdered in Benin City, Edo State, another student...
Read more

A Boeing 737 with more than 140 people on board overshot the runway at a U.S Naval Air Station in Jacksonville, Florida and crashed into the St. Johns River late Friday evening.

The U.S Federal Aviation Administration told journalists that the Boeing 737-800, a military contract flight operated by Miami Air International from Guantanamo Bay Naval Base, skidded off the runway. The nose is in the mud of the river. 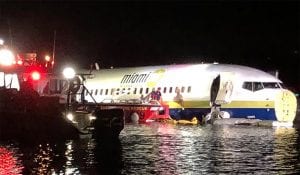 Twenty-one of the PASSENGERS were brought to local hospitals after the incident, but all of them were in good condition. 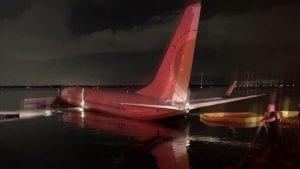 After about two years of evading trial, a former Comptroller-General of the Nigeria Customs Service, Abdullahi Inde Dikko and two others were let off the...
Read more
Top Story

Another teenage female student gang-raped, stabbed to death in Ibadan

Barely a week after a female university student was gang-raped and murdered in Benin City, Edo State, another student has been fatally raped in...
Read more
Health

Hunger Games – The Socioeconomic Divide and the Response to Disease Outbreaks

By Dr Adaeze Oreh   The global count of confirmed cases of COVID-19 has since passed the six million mark, close to half a million families...
Read more
Articles and Opinion

By Daniel Obaseki The current COVID-19 pandemic has taken the world by storm and shaken the health systems worldwide. Nations that apparently had advanced and...
Read more

Instead of quelling some of the outrage expressed by demonstrators near the White House who were protesting the killing of George Floyd, President Trump...
Read more

President Donald Trump on Wednesday threatened that Republicans will try to close down social media platforms a day after Twitter, for the first time,...
Read more

British Airways set to sack all flight attendants, then rehire up to 75% of them at reduced pay

British Airways is reportedly preparing to fire all its flight attendants, then rehire up to 75% of them at dramatically reduced pay.   " On 15th...
Read more

In spite of blackmail, we ‘ll not give up NDDC probe...