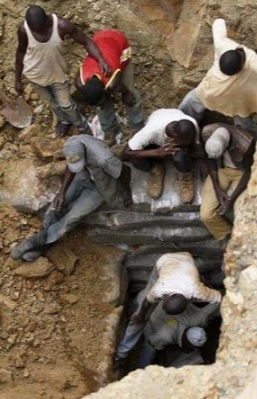 Oct 3, 2022
The Federal Government has ordered the suspension of all mining activities in Zamfara state with immediate effect.

The directive, which was made known on Sunday, by the Acting Inspector General of Police (IGP), Mohammed Adamu, at a press conference in Abuja, warned that any operative that proceeds with mining activities will have their licenses revoked.

The IGP also revealed that all foreigners at the mining sites have been asked to vacate their locations.
The ban comes as the IGP just launched a special operations called “Puff Adder”, to flush out bandits in Zamfara and three other states; Kogi, Katsina, Niger, as well as the Abuja-Kaduna expressway.
Adamu stated: “The Federal Government of Nigeria has decided as follows; Mining activities in Zamfara and its environment are hereby suspended with immediate effect.
“Consequently, any mining operator who engages in mining activities in the affected locations henceforth will have his or her license revoked.”
Persecond News recalls that the IGP launched the operation on Friday, aimed at reclaiming every public space under the control of the bandits, arrest and bring to book all perpetrators of violence in the area.
Federal GovernmentIGPMiningMohammed AdamuZamfara
Share
Subscribe to our newsletter
Sign up here to get the latest news, updates and special offers delivered directly to your inbox.
You can unsubscribe at any time

Imperative of a post-election renewal of Nigeria