At least 19 dead as bombs target cathedral in southern Philippines 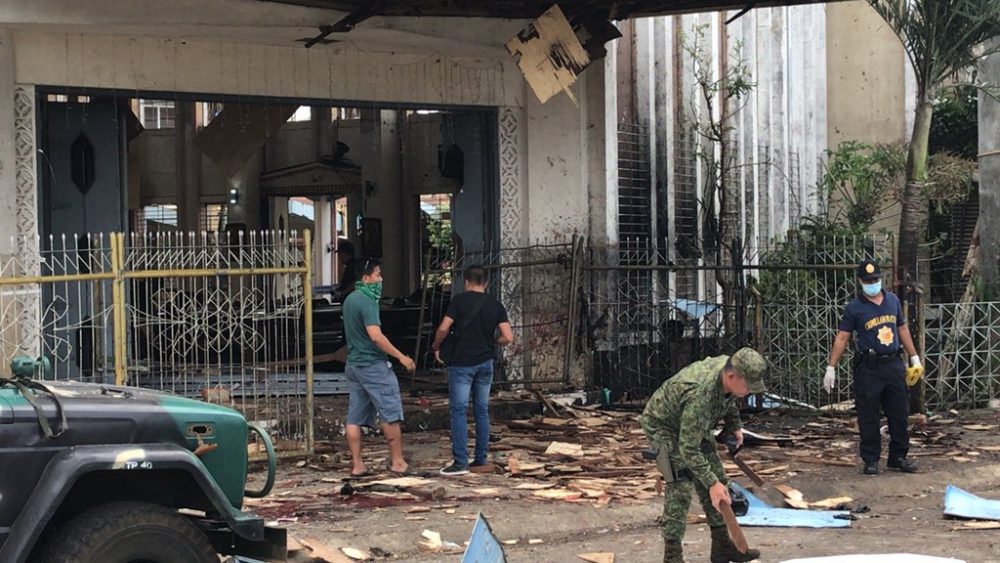 (AP) —-Two bombs exploded outside a Roman Catholic cathedral on a southern Philippine island where Muslim militants are active, killing at least 19 people and wounding nearly 50 during a Sunday Mass, officials said.

The first bomb went off in or near the Jolo cathedral in the provincial capital, followed by a second blast outside the compound as government forces were responding to the attack, security officials said.

Photos on social media showed debris and bodies lying on a busy street outside the Cathedral of Our Lady of Mount Carmel, which has been hit by bombs in the past. Troops in armored carriers sealed off the main road leading to the church while vehicles were transporting the dead and wounded to the hospital. Some casualties were evacuated by air to nearby Zamboanga city.

“I have directed our troops to heighten their alert level, secure all places of worships and public places at once, and initiate pro-active security measures to thwart hostile plans,” said Defense Secretary Delfin Lorenzana in a statement.
Don't Miss

Jolo island has long been troubled by the presence of Abu Sayyaf militants, who are blacklisted by the United States and the Philippines as a terrorist organization because of years of bombings, kidnappings and beheadings.

No one has immediately claimed responsibility for the attack.

It came nearly a week after minority Muslims in the predominantly Roman Catholic nation endorsed a new autonomous region in the southern Philippines in hopes of ending nearly five decades of a separatist rebellion that has left 150,000 people dead. Although most of the Muslim areas approved the autonomy deal, voters in Sulu province, where Jolo is located, rejected it. The province is home to a rival rebel faction that’s opposed to the deal as well as the Abu Sayyaf group, which is not part of any peace process.

19 dead as bombs target cathedral in southern Philippines
Share
Subscribe to our newsletter
Sign up here to get the latest news, updates and special offers delivered directly to your inbox.
You can unsubscribe at any time

Nigeria tells U.S, EU not to interfere in its politics after removing CJN