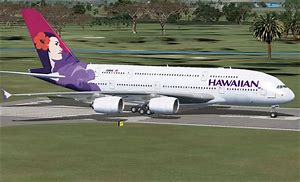 A crew member for Hawaiian Airlines died in the air from a suspected heart attack, despite attempts to save him using CPR.

On Thursday, Emile Griffin was working on Flight 50 when he went into distress. A passenger told Hawaii News Now that the crew performed cardiopulmonary resuscitation “for hours” and a doctor and paramedic assisted with the “sad and very confusing” situation.

Passenger Andrea Bartz, whom Yahoo Lifestyle could not reach for comment, live-tweeted some information.

The passenger also told Hawaii News Now that the crew announced an emergency but didn’t explain. And that after diverting to San Francisco International Airport, the plane was stalled on the runway for almost two hours waiting for the coroner.

All 253 passengers were reassigned available flights and will be compensated, says Botticelli.

“We are deeply saddened by the loss of Emile Griffith, a member of our flight attendant ‘ohana for over 31 years who passed away while working on our flight between Honolulu and New York last night,” Ann Botticelli, an airline spokesperson tells Yahoo Lifestyle in a statement. “We are forever grateful for Emile’s colleagues and good Samaritans on board who stayed by his side and provided extensive medical help. Emile both loved and treasured his job at Hawaiian and always shared that with our guests. Our hearts are with Emile’s family, friends and all those fortunate to have known him. Hawaiian Airlines has made counseling available for his fellow employees.”

A representative of the San Mateo County, Calif., coroner’s office tells Yahoo Lifestyle that Griffin was 60 years old and a resident of Pahoa, Hawaii.

Hawaiian Airlines
Share
Subscribe to our newsletter
Sign up here to get the latest news, updates and special offers delivered directly to your inbox.
You can unsubscribe at any time

Nigeria tells U.S, EU not to interfere in its politics after removing CJN