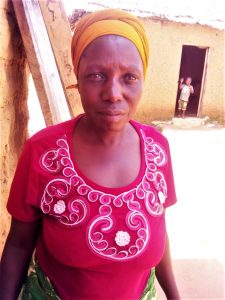 No mother deserves this punishment:

A grandmother whose 35-year-old son, 21-year-old daughter-in-law and 5-year-old granddaughter were shot dead by herdsmen is now homeless after she and other relatives fled the attack in August.

“We were taken in by a family in Jebbu Miango village, but unfortunately the room we were given has been destroyed as a result of torrential rains,” Talatu Gado, revealed as tears ran down her cheeks. “You can see that we now sleep in the open.”

Gado and her relatives were at their home in Angwan Kauna village when the herdsmen attacked on Aug. 3. Her son Emmanuel Gado, his sister-in-law Ladi Monday and the latter’s daughter, Mary Monday were killed in the gruesome attack. A fourth relative, 7-year-old Gado Monday, was wounded by gunshot.

“Prior to the herdsmen attack on us, they had while grazing their cattle around homes and farms threatened us severally,” Talatu Gado told  US media outlet.

“One of them once told me that a day would come that I will weep, that is if I’m still alive to cry. I never knew they’ll carry out their threat. Now my heart bleeds.”

On the day of the attack at about 6:30 p.m., her daughter-in-law and other women were cooking the evening meal when the herdsmen attacked their village, she said. Her granddaughter was taking a bath. She and her husband, Gado Andra, were seated as they waited for dinner. Suddenly they heard her son, 25-year-old Friday Gado, shouting outside the house that herdsmen were attacking the village from all sides.

“We all scattered in different directions, rushing out of the house through available exit points,” Talatu Gado said. “Other family members who were too scared to run out rushed into bedrooms to hide.”

The four family members who remained inside were shot, with the three dying and Gado Monday wounded.

“Those of us who were able to escape from the house survived the shooting, but we were displaced as we have been forced to flee the village,” she said. “Many in the community who also survived have fled to other areas. Some are living with relations in Miango town, while others are living in Internally Displaced People’s camps in the city of Jos.”

The matriarch and her relatives have not been able to return to their village due to the threat of further attacks, she told Morning Star as US news network.

President Muhammadu Buhari in April said the killings in some parts of Nigeria would soon come to an end as his administration was finding solutions to them.

The President’s assurance followed a fresh attack by Fulani herdsmen, at the time during which 10 persons were killed, while many others were injured in the Logo and Ukum local government areas of Benue State.

“The problem is older than us. It has always been there, but now made worse by the influx of gunmen from the Sahel region into different parts of the West African sub-region, Buhari said.

“These gunmen were trained and armed by Muammar Gadaffi of Libya. When he was killed, the gunmen escaped with their arms.

“Herdsmen that we used to know carried only sticks and maybe a cutlass to clear the way, but these ones now carry sophisticated weapons. The problem is not religious, but sociological and economic. But we are working on solutions.”

The U.N. High Commissioner for Refugees estimates violence in the country is responsible for more than 1.9 million people still internally displaced.

Herdsmen attackTalatu Gado
Share
Subscribe to our newsletter
Sign up here to get the latest news, updates and special offers delivered directly to your inbox.
You can unsubscribe at any time