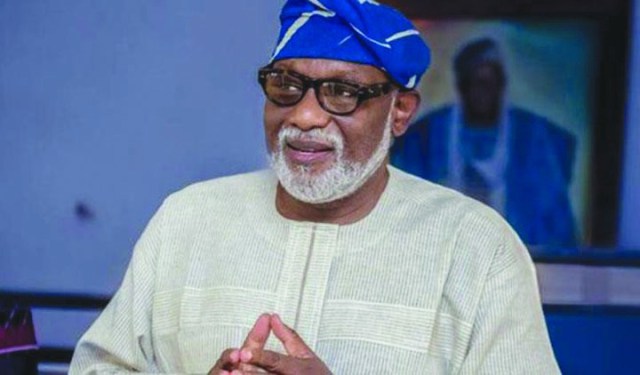 Share
A group of the All Progressives Congress (APC) in Ondo state, on the platform of the Ondo APC Solidarity Group, has expressed doubt over the loyalty of governor Rotimi Akeredolu, on the re-election of President Muhammadu Buhari come 2019.

This comes as he is allegedly accused of “test-running the Action Alliance (AA) party”.

According to the group, Akeredolu, along with some individuals in the likes of Babatunde Fashola, Gov. Kayode Fayemi of Ekiti, Ibikunle Amosu – Ogun, Gov. Rochas Okorocha – Imo, Muiz Banire and others have recently held various secret meetings in Akure, over 2023 elections in support of their presidential candidate, Babatunde Fashola, as against 2019 elections for President Buhari’s success, as alleged.

Addressing newsmen at the APC national secretariat today in Abuja, the Convener of the group, Comrade Gbenga Bojuwomi, disclosed that Ondo and Imo States have been picked as the “launch pad of their secret agenda, for test-running the Action Alliance (AA) party.”

He said: “Infact Gov. Akeredolu has directed all APC members loyal to him in Ondo State to mobilize for AA and work against President Mohammadu Buhari in the forthcoming general election.

“In order for Governor Akeredolu to prove to Mr. President that he can decide whatever happens in Ondo State and to showcase the Raji Fashola presidential ambition’s strength, virtually all the people around him have picked nomination forms of AA for Senate, House of Representative and State Assemblies.”

“Governor Akeredolu’s plan is to spend whatever amount released from APC for the election on his loyalist in Action Alliance.”

The group therefore called on DSS, EFCC and ICPC to beam their searchlight on what they call “financial mobilization for AA in Ondo and Imo States.”

2019: APC group accuse AkeredoluOkorochaothers of sponsoring AA party against Buhari
Share
Subscribe to our newsletter
Sign up here to get the latest news, updates and special offers delivered directly to your inbox.
You can unsubscribe at any time