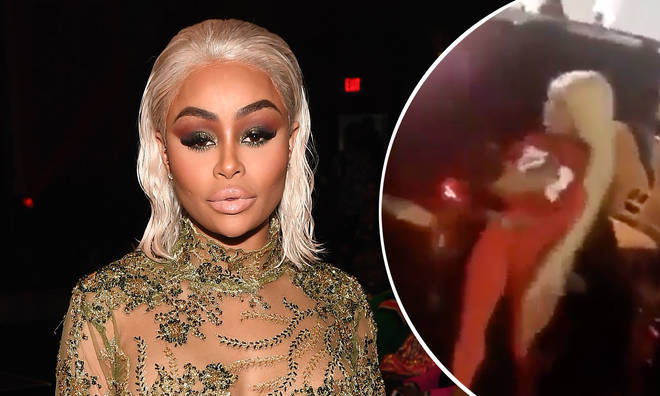 Blac Chyna landed in Lagos to promote her controversial skin-lightening cream this week, but things soon kicked off when Chyna attacked someone in a parking lot in Lagos.

Law enforcement officers quickly arrested the situation and prevented escalation of the altercation.

The former fiancee of Rob Kardashian flew out to Lagos to promote her controversial skin-lightening cream with Whitenicious, which  caused a huge stir on social media last week.

Despite the outrage, the 30-year-old entertainment personality went through with the promotional trip. Things turned sour, however, during a run-in with a fan in a parking lot.

In a video obtained by Tunde Ednut, Chyna can be seen jumping out of her car and lunging at someone as her friend tries to hold her back. Chyna pushes her out of the way in an attempt to throw hands at the unknown party.

She’s then pushed back into the car by her crew. Watch the video above.

Following the backlash she faced last week, Chyna took to Instagram to post a meme mocking her critics.

Nigerian musician Burna Boy slammed the mother-of-two for her promoting the skin product.

“Anybody who attends this event might have well comment suicide,” he wrote on Instagram stories. “@blachyna please don’t come to my home and sell your poison

Blac ChynaBlac Chyna Tries To Physically Fight Someone In Lagos During Skin Bleaching Event
Share
Subscribe to our newsletter
Sign up here to get the latest news, updates and special offers delivered directly to your inbox.
You can unsubscribe at any time

I never said I will probe Fayose – Fayemi