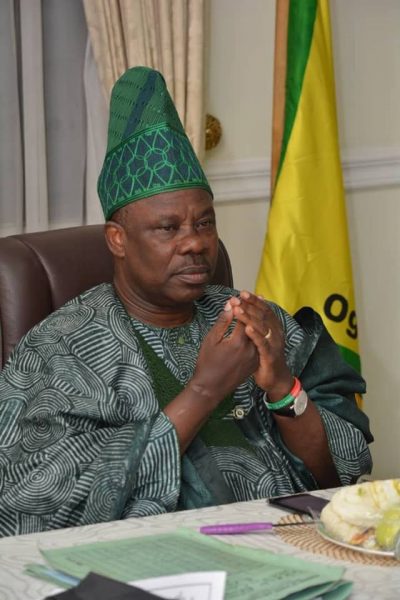 Ogun state governor Ibikunle Amosun and his kitchen cabinet are running a systematic campaign of harassment and disruption directed at legitimate party constitutional enforcement activity being conducted on behalf of the Nigerian people by the ruling APC party.

The  party on Wednesday said that Governor Amosun tried without success to commit fraud while trying to force his gubernatorial candidate on the party.

On Monday, while swearing in Mosunmola Dipeolu, Chief Judge of the State, at the Government House, Abeokuta, Amosun had accused the party’s leadership of electoral fraud.

“If we speak to the merit of this case, the whole world saw it, the visuals were everywhere, where the Ogun State governor gathered some aspirants, stakeholders and said clearly, there won’t be primaries and right there he pointed at who the next Governor, Senator, House of Representatives candidates would be. He named himself the next Senatorial candidate, said National Publicity Secretary of the All Progressives Congress (APC), Lanre Issa-Onilu.

“On the day they all came for screening, including the governor, he suddenly left with other aspirants and returned back to Abeokuta, gathered some people and sent back to the NWC that they wanted indirect primary and the other aspirants said we were all here together, that they didn’t know when this change was made.

“Meanwhile, someone had gone to court and the court had barred the State executive from anything to do with the party but we all saw on national television where the State Governor and the State executive, actually conducted their own primary and the process threw up the Governor’s preferred candidate.

“It was the SSG in Ogun State, who was reading the result until it occurred to him that he had no power to announce the names, so he handed over to the state chairman of the party who also shouldn’t have done that – he is statutory barred, the court had told him not to participate in the primary.

“Secondly, the state chairman has no power to conduct primary, that power resides with the NWC.

“So, whatever the governor did was self-help and there is no provision for self help in the party’s constitution. Eventually, the NWC panel that was constituted to conduct the primary went to Abeokuta and did the primary.

“The governor’s preferred candidate chose not to participate in that exercise. So the party stands by the result of that primary it conducted in Ogun state.

“The governor has done his best to get validation for his self-help. That is not possible. The first thing he did was to start saying things that made it look like something wrong has happened when nothing of such has happened.

“Secondly, he took some monarchs to meet the president. I am surprised because someone like him, with due respect to him should have understood the nature of the president we have, that no matter how close you are to him, he will listen to you but he will ask for the rules to be followed.

“So, the next thing we had was, he, looking for who to blame, and Asiwaju Bola Tinubu and Chief Segun Osoba readily came to his mind and he blamed them for that.

“If he didn’t do all of that, there has not been that consciousness to self appraise and ask himself, have I done the right thing? Am I asking for what is fair? Am I not putting the party in a position to ask them to do what’s wrong?

“Those are the questions we expect Governor of Ogun State to ask himself. He needs to self appraise, look at the actions he has taken and come to that conclusions that he’s taking the wrong route.”

He said: “He (the president) knows that they just went to Lagos, write all results, and that what they did is fraud. If the national working committee or the national chairman said there was any election in Ogun state, it was all fraud.”