APC plans to cause mayhem in Akwa Ibom – Udom 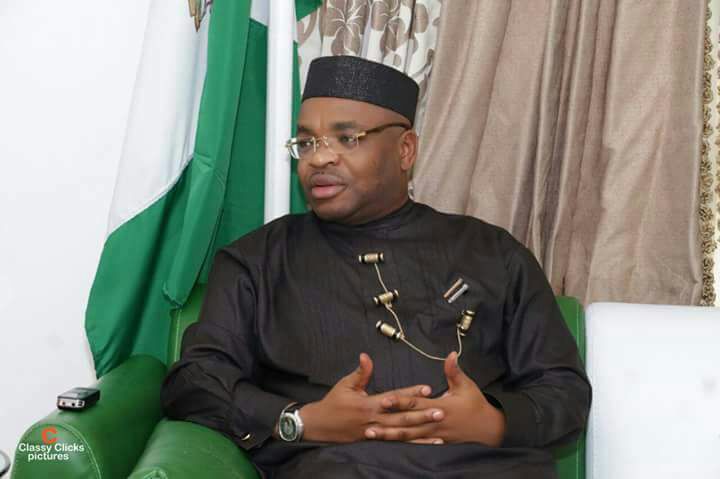 Akwa Ibom State Governor, Emmanuel Udom Saturday said he has uncovered plans by the ruling All Progressive Congress (APC) to cause mayhem in the state.

The Governor said he has been briefed on the alleged plans, described the antics of the ruling party as a deliberate ploy to distract his administration from delivering her mandate, prior to the 2019 general elections.

Udom said the plan willl all end in futility.

This is coming a day after Senator Bassey Akpan, who represents Akwa Ibom North-East, raised a point of order on the floor of the Senate, alleging that there was a grand plan by the APC in Akwa Ibom State to disrupt the 2019 governorship election in the oil-rich state.

Udom who was at the State House, Abuja to meet with President Muhammadu Buhari told  State House Correspondents that while God is the ultimate giver of power, he was not afraid of losing re-election next year.

He said, “When it comes to power, it is only God who determines and we are conscious of that. We are professionals who have made names in other places. So, when people just discuss some of these things we keep doing our own businesses.

“At times some of these things are to distract you but we refuse to be distracted. We play politics of development and our people are seeing that.

“So, whatever would have tried in any way to distract us we don’t want to be distracted. So, don’t be bothered about that. It is only God who determines what happens the next minute, not man. And no man is God”.

He said anyone planning violence and war in Akwa Ibom was wasting his time as people of the State have resolved to be peaceful and will remain so.

He however stated that such threats were being monitored even at the level of the presidency, and he believes there is no cause for alarm.

Udom added, “At the moment Akwa Ibom State is very peaceful. We only hear of those plots. I am sure you people heard where people were pronouncing that ‘Warsaw saw War’ and that’s what they wish Akwa Ibom would be.

“But we indigenes are saying no, we are peaceful and we want to maintain peace. Whoever wants to live by ‘Warsaw saw war’ will also see war on his own, not within the state.

“Election does not call for that. Our own democracy is about development and I think we’re conscious of that. As of today in terms of internal security, we are still doing very well and we’ll continue to carry everybody along.

“I think it is being noted. On actions expected that’s not for me, I am not the C-in-C. The C-in-C knows the action to take. The President is the father for all.”

APC plans to cause mayhem in Akwa Ibom - Udom
Share
Subscribe to our newsletter
Sign up here to get the latest news, updates and special offers delivered directly to your inbox.
You can unsubscribe at any time