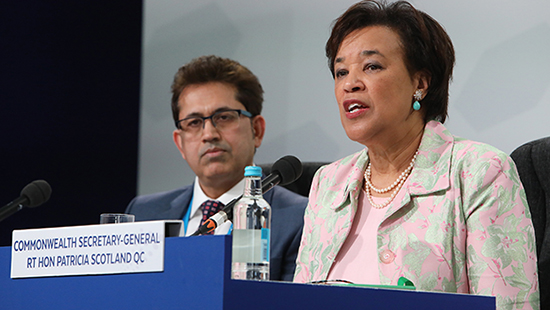 Finance ministers from the 53 member countries of the Commonwealth will meet in the margins of the International Monetary Fund (IMF) and World Bank annual meetings this week in Bali, Indonesia, to discuss financing solutions to help counter the risk of natural disasters in their countries.

The meeting on 11 October will be chaired by Nauru’s Minister of Finance, David Adeang. It will feature a keynote address by the Special Representative of the UN Secretary-General on Disaster Risk Reduction, Mami Mizutori.

“Natural disasters are increasingly inflicting massive negative economic and environmental impacts on Commonwealth countries,” stated the Commonwealth’s Secretary-General, Patricia Scotland.  “There are dreadful human and social costs resulting from the loss of lives and livelihoods they cause. We have seen rising levels of frequency and intensity in the devastating disasters that have affected countries in many regions of the world in recent years, including fatal hurricanes, landslides, earthquakes and tsunamis.”

“However, finding the means to respond to disaster risks can be complicated. The measures to be discussed by ministers directly address the obstacles linked to mobilising disaster finance, in order to assist member countries with reducing, managing, and adapting to disaster risk.”

The proposed Commonwealth Disaster Risk Finance Portal will serve as a ‘one stop shop’ for streamlined access to the numerous financing tools already available. It would include guidance on navigating the complex funding processes and broad range of providers, each with differing eligibility and access criteria, and challenging terms and conditions.

Ministers will consider extending the Commonwealth Climate Finance Access Hub’s advisory and technical support to cover disaster finance more widely, especially for smaller and more vulnerable Commonwealth countries. That would broaden the success of the of the programme, which already has been instrumental in helping to mobilise more than £4 million for climate projects in various parts of the Commonwealth, with a further £140 million in the pipeline.

Ministers will also discuss the concept of a new universal economic vulnerability index to focus on the economic, environmental, socio-political causes of vulnerability.

The meeting of finance ministers is the longest established annual ministerial meeting in the cycle of intergovernmental Commonwealth gatherings, and provides an opportunity for ministers collectively to consider approaches to emerging global issues and the economic development work programme of the Commonwealth.  Senior officials and Commonwealth central bank governors will meet on 10 October, prior to the ministerial meeting, to discuss disaster risk reduction and financial technology issues respectively.

Commonwealth
Share
Subscribe to our newsletter
Sign up here to get the latest news, updates and special offers delivered directly to your inbox.
You can unsubscribe at any time