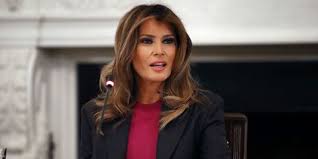 On the margins of her speech on abusive use of social media, U.S. First Lady Melania Trump’s announced that she will be making a trip alone to Africa in the coming autumn. There were no details as to which countries she would visit of what her specific agenda will be, other than to highlight humanitarian and development programs. She said that she had never been to Africa before, and that she “is excited to educate myself on issues facing children throughout the continent, while also learning about its rich culture and history.” While her statement is conventional for first ladies to make, the visit is likely to be a success. Notably, Laura Bush and Michelle Obama made solo trips to Africa, and both received positive reviews.

President Donald Trump is, of course, notorious for his comment that certain Caribbean and African countries were “shitholes,” and that his remarks at a lunch he hosted for African heads of state attending the 2017 UN general Assembly that were essentially transactional, telling the attendees that many of his friends go to Africa “to get rich.” He fired Secretary of State Rex Tillerson while the latter was in Nigeria on a five-country official visit, undermining much of the goodwill that it was likely intended to foster. Africans also generally follow President Trump’s hostile comments about African-American public figures, ranging from his former aide Omarosa Manigault (celebrated or notorious for her just-published tell-all book about the inner workings of the Trump administration) to players in the National Football League kneeling during the National Anthem to protest (among other things) police brutality. The administration has only just filled the position of assistant secretary of state for Africa, and there remains significant ambassadorial vacancies, notably South Africa.

Despite President Trump, there has been significant continuity in the administration’s policy toward Africa with that of the Bush and Obama administrations. Notably, Congress blocked early administration efforts to cut significant funding for U.S. programs in Africa, and for UN programs that also have, in effect, an African focus. In April, President Trump invited Nigerian President Muhammadu Buhari to the White House, apparently a successful visit on both sides. Thus far, if the rhetoric of President Trump has tarnished the American image in Africa, actual policies have changed little. Melania Trump’s visit Africa could do much to counter the bad rhetoric.

From the U.S Council on Foreign Relations

Oct 1, 2022
John CampbellU.S. First Lady Melania Trump to Visit Africa
Share
Subscribe to our newsletter
Sign up here to get the latest news, updates and special offers delivered directly to your inbox.
You can unsubscribe at any time